I found this in June 2012's MOJO. A hoax, no doubt about it (or rather, just the vehicle to get rid of 100 prints that I personally wouldn't buy). Period.

Devon
Posted by Devon at 7:06 PM No comments:

Everyone's favourite band, Shonen Knife, will be releasing a new album in June 2012. Here's a taster:

Just today I finally got the "Candy Rock" CD. I've been looking for this one almost forever and a day.

Devon
Posted by Devon at 6:15 PM No comments:

A classic every which way! And listening to this extended version, an interesting piece of history that's being brought into 2012, a mere 41 years after the fact, it still sounds great. Wether you need the sessions or the bonus tracks is up to you, but just speaking of the music, this has aged very well. Not at all really! The tracks sound as fresh today as when I first heard the original way back, when hippies still roamed the earth. Listening to this here, I seem to remember when tracks from this album were in the charts and played on the radio. 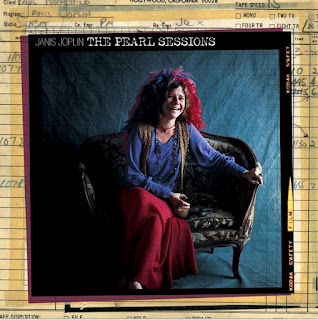 It's strange how some music is interesting even after four decades and some has gone absolutely flat. Say the Doors, whose music I was listening regularly to, but haven't touched in about 20 years (and will probably not make another attempt in my lifetime). The Doors were o.k. for the second half of the 60's and were never meant to go any further. Janis Joplin on the other hand, speaks to the rock connaisseur even though she/he might be hard of hearing today. There's also a 2 x 10" vinyl release available.

Devon
Posted by Devon at 7:12 PM No comments:

Devon
Posted by Devon at 8:44 PM No comments:

Don't ask me! I have no idea about the finnish language. I just read a column of some Swiss sports journalist reporting from Helsinki on the worldchampionship in icehockey and he complained about the language, as nothing is really familiar. Take almost any other language you care to name and you can at least figure something out, even though you're really left in the dark. Welcome to the club!

Since the CD came in with only four questionmarks as the accompanying text, it was up to me, to take my three best guesses and I came up with the assumption, that this must be some kind of tribute to Kari Peitsamo (who I didn't have any clue about either, but there's at least one english language article available on the internet). A few days later, Teppo Nättilä, of Doctor's Order fame and being their bassist, put it straight. Here's the explanation in his own words:

Kari Peitsamo is a famous finnrock artist, he started his career already in 1977, and has so far released about 68 albums, almost all the material is his own and usually in finnish. Not a big hit artist, but quite a personality and cult hero, who has done all kinds of different things, very often solo - just a man and a guitar, rock-trio, rock'n'roll-trio, Creedence-kind of line-up etc. Always with great, funny and sometimes very weird lyrics, and almost always in finnish.


Anyway, in January 2011 we were asked to be a backing band at a Kari Peitsamo singing contest. The first ten who were quick enough, were picked to be in a contest. Each one of them (one was a duo) did choose one Kari's songs to sing, and we provided the backings. Each one of them had 15 minute soundcheck with us to arrange and rehearse their songs. The performances on the CD are all from the soundcheck. 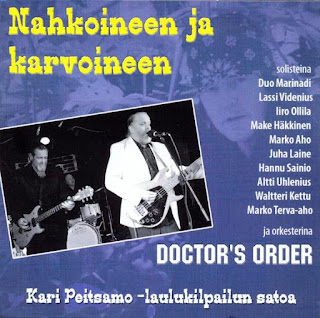 Only 100 copies of the album have been made, so it's a very limited edition. It's been released by finnish countryside music association (not a country music associaton), even thou it's not country, but it's finnish music with finnish lyrics. Earlier they have released a couple of finnish country albums and cd-ep's.


At the competition Kari Peitsamo acted as a judge, he picked the winner. Duo Marinero won the whole lot.


After the competition Doctor's Order played a short set, "Boogie kind of thing" even featured some finnish lyrics, it was our tribute to Kari. Then Kari played a solo set. At the end of the evening Kari, me and Kimmo played a jamming kind of thing, there was no rehearsals, he just told me the key, and there we went. It ended when Kari's (in fact it was Archie's) guitar amplifier started to smoke. There is a few songs of the jam on U-tube, named something like Kari Peitsamo & Dos Doctors.
UNQUOTE

So, there you have it, straight from one who's been there. It's a very enjoyable CD (and I don't say this just because it's Doctor's Order), but it was a bit unusual for me. I had to remind myself all through the album, that it was really Doctor's Order playing here. It's too easy to forget this fact, because it's totally different from what the band usually releases. 10 tracks, clocking in at just under the half hour mark. Although I don't have a proper Kari Peitsamo release in my collection, I did find one of his tracks on a compilation. This Status Quo/John Fogerty cover is also being part of this CD, "Rokaten ympäri maailman"

One thing, Teppo Nättilä mentioned that this was recorded during their rehearsals. That might point to a substandard CD, but fear not, the sound is very good and I wouldn't have thought this was "not the real thing".