Doctor's Order are history. Nearly twenty years on the road, in the studio and at rehearsals. They've made quite a body of work to be proud of and quite rightly so. Their debut album "Doctors In Disguise" came out in the early noughties and when I got the CD (out of the blue, I have to add), I was immediately taken by the 14 tracks on offer. My kind of music. Well written original songs with not even a handful of covers, beautifully executed (on the right side of rough and ready), what else did I want more?

Well, for one, seeing the band live in concert and I happened to be at a few of their gigs in Finland. Sometimes I had the urge to get a frequent flier account with Finnair. However, I decided against it. Not that I have anything to hide, but I never used any bonus program.

A while ago, Teppo told me, that they were disbanding Doctor's Order and I just made it to Finland to see the band at one of the last gigs before the final curtain. Their legacy is preserved on quite a few CDs and one LP and if you want a down to earth and honest band, get some of their releases. Throughout the years, their music got a bit more sophisticated (which is not a bad thing per se), but with each new release I referred back to their debut. Doctor's order branched out (musically speaking) yet stayed true to their roots and still, their "1, 2, 3 let's go" attitude on "Doctor's In Disguise" is, where, in my opinion, the real heart of the band is.

Later releases didn't slack in the songwriting department and the band offered quite a few gems during their lifetime. Of all the CDs by Doctor's Order in my collection, the debut is the most listened to. By a country mile. There's a "Tres Aniversario Edicion" with 11 bonus tracks (the whole CD is remixed and remastered) and the book on Doctor's Order had been closed after almost 20 years of holding up the flag of true R&B (British style). If I talk about R&B (British style), I'm thinking of Dr. Feelgood, Inmates and a lot of others, mainly going under the Pubrock flag. This is what I had to say about the debut CD:

2020 comes and with it Corona. I'm bored to tears (Greg Koch) during the lockdown and in comes a message from Teppo. The band has decided to release "Doctor's In Disguise" as a 50 copies only item, called "Alternative Doctors In Disguise (Rehearsal Tapes)". The bad news first: With only 50 copies on the street, this is sold out already. I don't know how they arrived at that number, but there's certainly more fans of the band interested in this item. Maybe, just maybe, it was a number that could easily be sold off and not having to care for stock for the next 20 years. 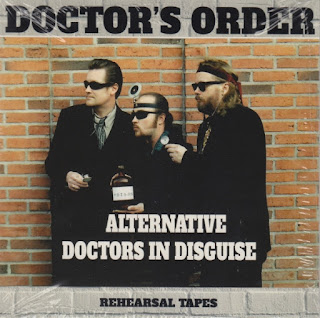 The "Rehearsal Tapes" are not the full commercially released album.  For starters, there are 13 tracks on the CD (the original had 14 on the clock). Missing are "Talking 'Bout You" and "The Meanest Of The Mamma's". The recordings were actually done at Timppa's place and I can only speculate, either the two tracks were forgotten at the time, were not ready yet or the tape was simply broken (or the minidisc or whatever this was recorded on). Having said that, don't expect an audiophile masterrecoding but a honest down to earth glimpse into a work in progress.

When I listened to the CD for the first couple of times, I did so on my smaller stereo unit and the sound was somewhat muddy. Not to the extend that it was bothersome, but so, that one notices the "flaws". I'm never using treble or bass on my units. Just never. Switching to my main stereo brought the music out much shinier, but I do believe this has mostly to do with the loudspeakers I'm using there, as they are somewhat top level heavy. When I'm getting serious with my music, I'm using the larger unit and when I'm listening to my Phil Collins solo collection, the smaller nearfield listening system will have to do. 😇

As a matter of fact, both setups work for me. As I might have said (did I?), I like my Doctor's Order on the rough side, yet enjoy the later recordings just as much, because they came across more polished but never made it across the wall to the Phil Collins side, so to speak. I have absolutely no talent (or my short-term memory fails me - I don't know) for comparing the same track in different recordings side by side. I do so sometimes in an audiophile setting (same tracks, different pressing, or as the saying goes "the squirrel has a hard time feeding itself). 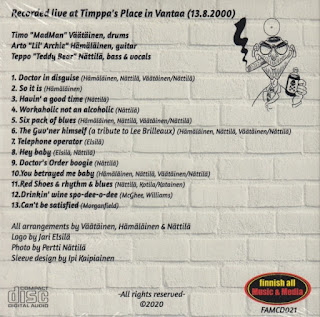 Although I've heard these songs so many times, I had a hunch, that the tracks sounded slightly different. As per Teppo, the recordings were done about a month before they got into the studio to record the album.  I'm not done yet, but it takes time to dissect the songs and I'm not sure I really want to do that. There's no way one can explain the world according to "Doctor's In Disguise". So, sit back and just enjoy it.

There's one track on the CD, that's not on the original debut album. "Hey Baby". I'm not sure wether this made a show on another album, but I have a feeling that I do know the song. Might have been a part of the band's live shows. I draw a complete blank, except that it is more than familiar to me. In conclusion, this item is absolutely essential if you're, like me, a die-hard Doctor's Order fan. When Teppo told me about this, I went "oops, I don't believe this" and when I got the CD in the mail, I couldn't wipe the grin off of my face. I know, it's not fair waxing about a CD that's essentially unavailable, but worse things can happen (not many, granted).

Roland
Posted by Devon at 12:05 PM No comments: