One Foot In The Grave (US Punk Band)

Must have been 1992 when I became aware of a band called One Foot In The Grave. A Punk band consisting of folks well into their retirement age. I've no clue anymore how I came across their debut CD "Lookin' Good! Who's Your Embalmer?" I might have bought it from a local shop, no idea! What did I expect, no idea, second round! I'm into weird stuff (not what you're just thinking now) and my passion for the far side of music might have led me this way.

Their debut is anything but Punk. Good Rock, more in the Pop vein, but excellent songwriting with hooks galore. Some covers and a handful of originals (as far as i can tell). The lyrics are sometimes quite witty, but I don't really buy into their "Punk" attitude. It's all a bit set up and frankly speaking, I always suspected a bunch of studio musicians having more than a hand in this. Even back then, there was not really any useful information to be found and it's become even worse over time. 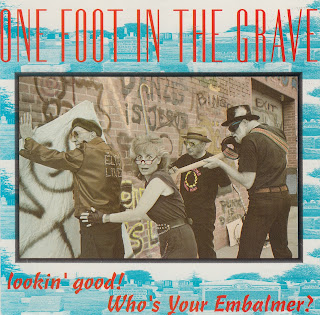 This said, the CD is very enjoyable and you can thank me later for pointing you this way. These days, it's probably only available on Discogs and the like (and it won't break the bank either). The reason I'm waxing about this, I'm not listening to much music these days, my count for last year is around 3 LPs, 10 CDs and that's it folks! Still interested in everything Rock, Blues and Jazz, But I'd rather dwiddle my thumbs than sitting in front of the Stereo. The reason this band came up again, I've read a piece about Rock on the hard side of town and One Foot In The Grave came up. Not this outfit, but close enough to want me to dig through my CDs and give them a spin. I did find them in the first 30 seconds of looking for them (which is an exceptional rarity as my collection is spread all over the flat) and these things sound as fresh as they were more than 20 years ago. 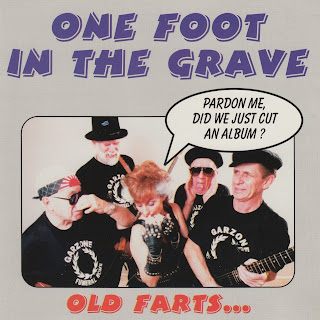 And this here, "Old Farts ...", is their second outing (from 1995). A worthy successor and the recipe is still the same, that is to say, good songwriting (some covers again) and songs laden with hooks. Both CDs come in at around 30 minutes each. So, this is not like you have to spend a week listening to their total catalogue, because, this was the complete output of One Foot In The Grave (as far as I know). I, for one, would have liked more albums, but the novelty seems to have run its course. Or health was indeed an issue. If the claim, that some members were even around the 70 year mark, is even remotely true, I'm not much out on a limb to guess, that some members are pushing the daisies now. Well, it's "Two Feet In The Grave" now!

Well worth your time and cash, you won't go wrong here.

Roland
Posted by Devon at 5:58 PM No comments: