Being a diehard fan of Dr. Feelgood and Wilko Johnson, since before "Down By The Jetty" was released, thank you German "Sounds" for being on the edge with your reporting, searching for items not yet in my collection has become a chore. Make no mistake, I'm still missing a lot of items, mainly country variations of commercially released records. And, of course, testpressings, acetates and the like. But the days are truly gone, when I checked lists on a weekly schedule to find out, wether I could add something to my collection. In fact, I laid rather low, because I was, truth be told, bored with scouring the internet and waste hours on searches not very fruitful. And I don't have the feeling I missed out on good stuff.

Most of the missing pieces I added during the last 10 years or so, I caught upon on a hunch. Either checking one of the big internet dealers or just plain walking into a record shop or a record fair. No more lists for me. I know, I'm stilling missing one Dr. Feelgood release on 7", but I've forgotten which one. There's another in my wants list on Discogs, but that's it. I'm not saying no to good product and by good, I mean collectible. The problem is also, there's rather little available and if it is, the asking price goes through the roof. I'm a Dr. Feelgood/Wilko Johnson collector who's bought items on the off-chance that they might be fakes (you very seldom get a second chance - despite what the saying states). 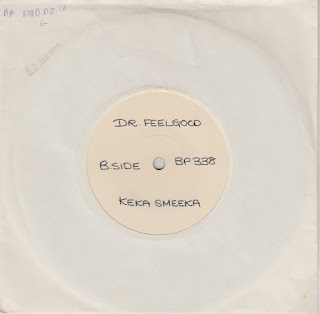 I came across this B-side just recently, not looking for Dr. Feelgood items especially, but it was a nice surprise. Of course, no A-side and GB£ 50.00 for you, govn'r. If someone asks me, do you really need stuff like this, the only possible answer is a resounding YES! Even though I've sworn off checking lists, I still buy any interesting item that comes my way. There's not even a question wether I need this or not (YES again!), but I believe it's too late for me to stop collecting Dr. Feelgood and Wilko Johnson.

One thing I'm glad about, both are not exactly the Beatles and thus, spending cash is conceivable and will not break the bank. Even high class items can be had for a decent amount unless the Beatles where you might have to fork out in the 6 figures. Lucky me!