Both CDs have a 1996 P/C, but I only saw an advert in a recent U.K. music magazine about two/three weeks ago. This is not really, what most folks would expect, a novelty release, although I must admit, there's some stuff on here that makes you grin, the cover of "Fire" (the old Arthur Brown ditty) for one just being such a point, but quite a showcase for the 1960's group sound from Japan. It's certainly not all garage bands, as the subtitle claims, but it's close enough to satisfy the serious music connaisseur. 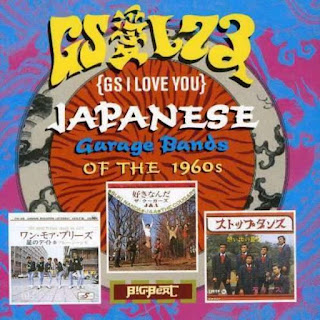 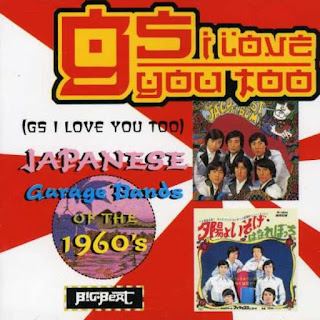 What you get is 55 tracks of the most enthusiastic GS from the land of the rising sun. There's certainly nothing poor about the selection on offer. Even the few cover versions, "I Saw Her Standing There" among others, are outstanding, exotic and excellent. I won't go about the singers pronounciation in case were the chosen language is English, but there's a lot of lyrics in their native language as well. And, I have to admit, although my collection of Japanese music is numbering quite a few items, both CDs are well worth as a sort of stepping stone, if you want to explore this scene further. These releases are distributed by ace.

Devon
Posted by Devon at 8:02 PM No comments:

When I'm buying records, I sometimes add an item just because I do. There's no real reason why it catches my attention. The cover? The country? The artist? No idea, really! And sometimes it just so happens that a real gem comes into my collection, such as the LP by Swedish singer/composer/guitar player Eva Westwood and her merry band. I'm one to go for exotic releases and what could be more exotic than a Rock'n'Roll LP with Swedish vocals. Exactly! And to much of my surprise, this wasn't one for the strange and weird section, but one to place among the real stuff.

The songs have all a real 50's feeling and are mostly uptempo. Eva Eastwood has a very good voice and sometimes she reminds me a bit of Connie Francis, that's not to say she's a copycat, it's just a faraway echo that pushes through. An excellent band is backing her and the twelve songs on offer are just the type of longplayer that I wouldn't hesitate to recommend to each and everyone with half an interest in vintage styled Rock'n'Roll. And if you go, "ah, I've heard all these record releases rehashing songs from 50 plus years ago, tell me something new", I'm leaning back, work in an artificial break, and before the suspense is unbearable, I tell you, that these are all Miss Eastwood's own works. There is not a single reheated song here. 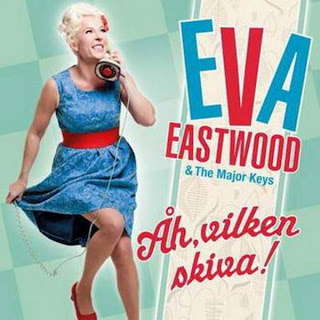 Well, you can shut your mouth now, there's a draft in here. The album is also available on CD (and as an English version on CD only "Oh, What A Party!"). I was checking the internet to see wether I could include decent video footage to show you what this is really all about, but there's no better argument to state the obvious fact, that digital can't match analog. The stuff you find on the www sounds thin and not of a quality I'd like to see in this blog. I can't remember having seen/heard such a discrepancy between the two with any other artist. The LP sounds full, instruments/voice all in the right place and on the internet it's like you hear it through an empty tincan. I don't know about the CD releases, but I expect them to be of similar quality to the vinyl.

Eva Eastwood and The Major Keys have been going sometime since the 90's. Check out her website at http://www.evaeastwood.se/. She might be a well known artist in her home country, but I certainly had no idea about her. There are quite a few releases available and a good mailorder source would be http://www.goofinrecords.com/.

Devon
Posted by Devon at 9:04 PM No comments:

It's becoming harder and harder to find releases with the participation of Wilko Johnson on the market that are not on my shelves yet. While my collection is far from complete, I seem to have turned into a very lazy guy during the last couple of years (or I finally got a life ...), but I'm not comparing catalogue number details as I used to do before. With age comes wisdom (so I hope) and I need to spend my days better than just trawling through the small print on the records in the collector's shops. 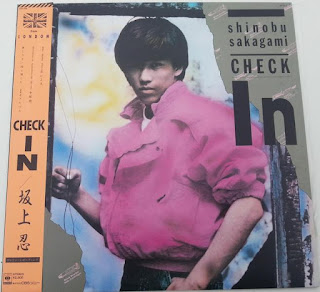 Having said that, I recently stumbled over this release by Shinobu Sakagami and had to have it, because it claims Wilko Johnson played guitar on a track called "Run Rhythm Run", although the Japanese Wilko Johnson website states that the master of the Telecaster has no recollection of playing for Shinobu Sakagami. Well, whatever, it sounds like our hero, choppy style and whatever. Could it be a fake performance by some copycat? I don't know, but I tend to believe that this is the real stuff.

As for the rest of this LP (as far as I know vinyl only), this is not a must-have. The best track by far is the one with the Wilko Johnson participation and I spare myself the work to list the other guest musicians. But to own a possible(!) sighting of the man, you need to be prepared to fork out some money, this doesn't come at a discount rate.

Devon
Posted by Devon at 7:27 PM No comments:

Wilko Johnson (in The Blues Magazine)

Just in case you missed it (don't worry, you can order this online), our very own Mr. Johnson has a sixpager in the debut issue of the new Classic Rock offspring "The Blues Magazine". 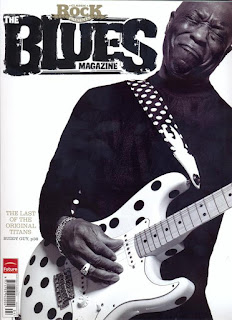 Should you be wondering, the scan is of the real magazine, this comes in a cardboardsleeve with a different design.

Devon
Posted by Devon at 7:33 PM No comments:

Jolly Roger - Rock And Roll Machine
It's a bit of a workout to write a review about a band's longplayer, when one knows at least one member of said band personally. When I receive such a CD, I usually go "please God, make it be a good one, so I don't have to lie about the virtues of the album", and, I've not been let down so far. Usually the music is excellent and I don't have to worry about growing a nose one foot long. The guardians of Rock'n'Roll can vouch for me, I'm writing nothing but the truth here and I'm not even taking shortcuts or brush the statements up.
The second serving of Finland's Jolly Roger, entitled "Rock And Roll Machine", lets you have 14 tracks, clocking in at just under 45 minutes. The tracks have been recorded in 2010 and 2011 and finally released this year. The big plus with this CD is, that all of the tracks are self penned (more about this later), and quite good ones they are.  Excellent soundquality, yet with exaclty the right dose of roughness. This is not your polished Sunday morning pop tune, this is Rock the way it should be played. Short, concise and to the point. 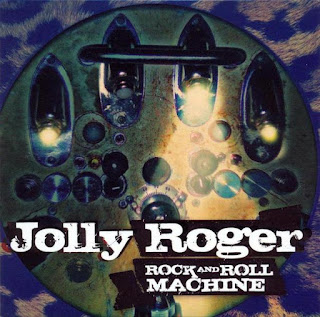 The whole enterprise starts with some kind of Blues/Bluesrock ("Sugar Daddy") with the Harmonica playing very hard and giving no way. Gets you a bit on the wrong foot, with an album title like "Rock And Roll Machine", but this is just a surprise moment, the song itself is first class. "Teleport Man" seems, to me at least, to be a Dr. Feelgood cover in disguise. Not that there's anything wrong with that, at the moment it's just killing me to remember where this riff is coming from. Yes, sure, I should know! But I have a Dr. Feelgood blackout now. You know how it is, it's on the tip of your tongue, but for the life of yourself, you can't get it out.
"Lover Man" proves, that Jolly Roger can shift gears down as well, although this is still a rocker, there's no "Kuschelrock" here. What's the thinking behind "M.I.L.F. Cow Blues"? Can someone explain this please? Not that I should have any strange ideas!  A track that owes a lot to Rockabilly is surely "Loveless". I'm pretty sure, any halfway decent Rockabilly fan would have me crucified for this, but it does sound like straight out of the fifties (well, maybe a bit exaggerated). And, hello, who's making an appearance in a further sort of cover version with "Come Back". I can't point my finger exactly to it, but my brain screams Hurriganes. Of course, it's an "original" again.
The line-up is as follows:
K. T. Kotila - Guitar/Vocals (of Jolly B. Good fame)
T. Levonmaa - Bass/Vocals
Ande Niemi - Drums/Harmonica/Vocals
By track ten, not that I needed to be assured, it dawned upon me, that trios (and it seems mostly to be a trio) are, where the real Rock'n'Roll meat is. Well, throw in some additional help every now and then, but the core of the Rock'n'Roll world since time began, is the trio. Everything else is pretentious noodling. Just listen to "Forty-Four", which is quite some example of what a stripped down band can achieve. Some musicians complain about having to play to many fills in a trio, which might be true, but on the other hand, I think with such a bare bones group, you're being kept on  your toes. There's no slack for you, you better pay attention all the time. I'm talking about R-O-C-K and not some, ahem, "Prog" or the like.
While the album slowly draws to a close, I have the feeling, "Evil In My Head" is another "cover". Now I'm leaning very far out of the window, but it does have traces of the Meteors (the Psychobilly outfit). What I actually wanted to say, is, when the 45 minutes are almost over, you realise that there was not a boring second in listening distance and you know, that you've just heard one of these rare albums that will make a return visit to your CD player every now and then. And then they leave you with the "Jolly Roger Rock'n'Roll", some kind of westside stadium screamer. Well, that's Rock'n'Roll for you. Aren't you glad Finland shows the world where the hammer is hanging?


And I haven't lied once in this review. You can order this CD via their website at www.jollyrogerband.net and have yourself a pretty good time with this album.
Cheers
Devon
Posted by Devon at 8:33 PM No comments: