I found the Ghools 7" from 1966 in one of my local record shops today. It has been on my want list for forever and a day: 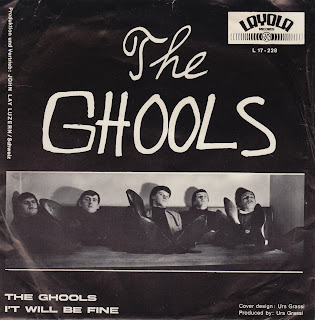 This is a case of desiring the item because it's rare and not because it is any good. Truth be told, this is a rather mediocre piece of two sides of 1966 Beat music. The slab of plastic was released in 1966 on the now very collectable Layola imprint. 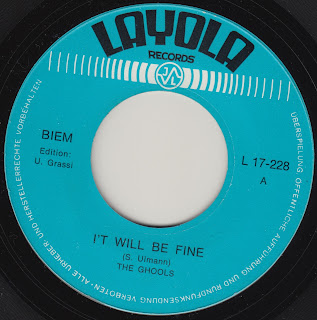 I don't know anything about the Ghools and I believe this was their only release back then. The band seems to have hailed from Basel/Switzerland and you'd be hard pressed to find  any substantial information on the www. Well, I didn't. Except that the two tracks seem to be in great regard with critics. Who said I understand anything about music? I can tell for free, I didn't make this claim. 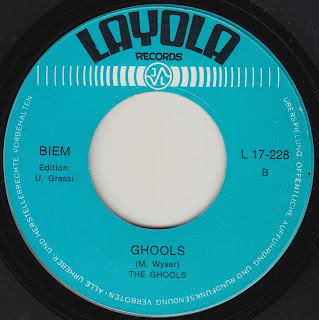 The track "I't Will Be Fine" is a typical typo and quite funny. Some bands in Germany, Switzerland and Austria were aping their stars (and this is what they were, stars to them) and that didn't hold them back to write lyrics in "English", although they barely understood the language. It was all about playing a role and it didn't matter if the clothes didn't fit, noone in rural Switzerland would have a clue anyway. Liverpool, Manchester and London were worlds away and those local bands were trying to live their dream.

As a piece of Beat history in the Northwestern part of Switzerland, this is priceless. But it comes with a price (pun intended), don't even think for a minute you can have this for chump change. As with a lot of other rare stuff, the asking rate is solely determined by the almost total absence of this item from the market. As such, this 7" is certainly a talking piece.

Roland
Posted by Devon at 6:15 PM No comments: