I don't claim to have my fingers on the pulse of contemporary music. Sometimes I'm lucky and I find myself a band worth talking about. At other times I've to be told. Several times. And then I buy a CD by four young (not even in their twenties) lads from Ireland and ... you might think this is the next hype coming down main street ... you're completely and entirely wrong. This as much a tribute to a band we all love, as it's hats off to early Yardbirds with a dash of the Rolling Stones. In fact, this is so far retro, it's bloody avantgarde.

Forget about me going through the 12 tracks that make up this album (there's an extended version with an additional four songs available) and suffice to say, it's all killer, no filler and lightning should strike me twice if I'm lying. I buy a lot of good to fantastic music, but this one took me back to the British Blues boom of the early sixties (which I know of second hand only, courtesy of my record collection) and the hungry sound of Dr. Feelgood ca. 1975. And not to forget, also a trace of the good old Pirates. I just hate the fact that I only got the standard issue CD, as that was all that was availble at the mail order I bought this from. I believe I have to shell out my cash for the deluxe version as well, then I have to go for the LP and I must have a long hard think about getting the EPs and 7"s. Here we go. 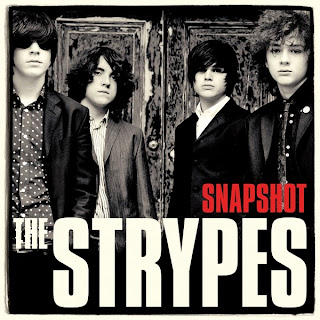 I just read, long after the fact that this was recommended to me, that the Strypes are about the hottest item in today's Rock circus. To me, that's a resounding yes, but I don't know about the market in general. This is not the kind of music that gets the majority of the listeners to crawl out from behind the oven. A shame really. 7 of the twelve songs are originals, with the others being cover versions, of course. But even the self penned tracks sound like classic British R'n'B. Which says a lot about the ability of the band. And if you wouldn't know it, you'd never guess that the band is so young, as they play much like a decades old road tested unit. If you're going to buy only one more record this year, make sure it's "Snapshot". You'll thank me until your dying day.