No, the header is not a joke! At least when it's up to Rhino who had the bright idea to go full bonkers on a release of an LP made out of recycled vinyl. Read all about it (The Who) in: Rhino's marketing dept. back to the past and let me quote Wanda Jackson "'Cause I'm a Fujiyama Mama and I'm just about to blow my top!". 2021! I had to check we're not back in the 70s, and Rhino comes hopping along and has the guts to sell a reissue of an album to the public by thinking the label and their marketing honchos are the greatest thing since sliced bread.

Let me tell you, you're not! You've gone from a decent (sometimes good) label to the absolute bottom of the barrel. You're trying to sell your cheap shot at getting a free ride on the climate change issues as a service to humankind, when all you do is throwing up a smokescreen. Rhino, you swivel chair warriors, you might be much too young to remember the 70s when your forefathers tried this stunt already and failed miserably. Granted, it was back in the day because of oil shortage, but history showed what the result was, a product not even good enough for a landfill.

And now your blabbering about saving the earth by saving carbon dioxide and we should buy it off your greedy hands. Thanks, but no thanks. I tell you something, even though I'm one of the people to buy every product that has been released which bears the Dr. Feelgood name (as long as it's not with Bobby on the mic), I'll gladly pass on this. And there's one more, I'll pass on every other product that'll be released by Rhino in the future. And I do something for the climate, you won't have to ship so much of your needless product around the world.

Keep on pulling your customers' legs, I won't shed a tear for you and your miserable excuse of a has been.

What are you supposed to be doing, when you know the band and listen to the new CD for the first time and later you'll write a review? Not as easy as it sounds, on the one hand you want to be as honest as possible and on the other you know, a review, to fold down the band, is simply out of the question. Thankfully, I never had to bend over backwards with Doctor's Order. The only difference it would have made, I'd have written less because I wouldn't have known the band so well. Less insight and more hot air. I do confess, sometimes it gets in the way, but I believe I sailed those waters.

Up come the Lockdown Docs and after the demise of Doctor's Order,  the lead guitarist Arto "Archie" Hämäläinen and the very first drummer in the band, Timppa "Mad Man" Väätäinen have found themselves in a new band. They've already released an EP with four tracks (see somewhere below) which is now followed by a sixtracker. At this rate, we can expect 8 tracks for the next release and before you can count to ten a full album is on the horizon. 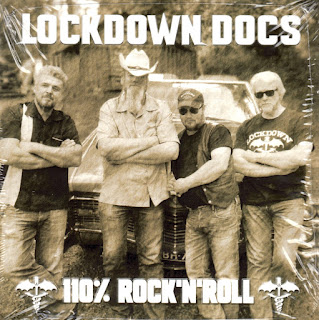 Not to drag the suspension endlessly out, the CD is excellent. I've listened to the tracks a few times online and now that the item has come into my posession via the help of the Finnish and Swiss postal service, it has been played thin and transparent ever since. Not true, you say? CDs can't be played thin and transparent, you say? Oh well, have your say! And now a commercial break: You can order this limited release from Blues-Shop in Finland (and that's the only place you can get it) but you'll have to move, as of April 16, 2021 only 25 copies are left. The band has their own website here.

What do you get? Six tracks of well worn ditties, played the way every self respecting band should play British styled R'n'B. There are some bands that play covers in their own way, some bad, some good and some the Lockdown Docs way. The EP clocks in at just beyond the 18 minutes mark (which is the only downside of this release – should have been an extended version, if you ask me). The line-up is still

The band sounds ... and I mean it, very well aware that I'm out there in the wild with this opinion, like a very worthwhile ersatz Dr. Feelgood. And I do mean this in the best possible and truest sense of the word. Yet they bring in a lot of their own anger and enthusiasm. Anger is maybe too strong a word, it's more like they know what they do and don't seem to give a care in the world. And for this alone, they get a mention from me on the wall of fame. This is serious stuff and it's amazing to hear the band delivering the tracks so easyhanded yet with pure expertise. 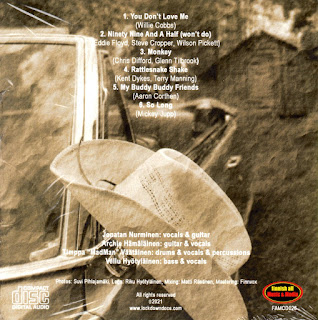 You Don't Love Me

Of course, I'd like to think I know my Dr. Feelgood well enough to have an educated opinion. But I'm getting in my own way here. If I want a Dr. Feelgood cover, this is it. That's the way it has to sound. Competent is the word. The playing is flawless (to my ears at least) and in the great tradition of our favourite orchestra. Remarkable guitar work, drums well worth a Big Figure mention and Sparko on bass (wait, this is not Sparko? Really?) and the killer, a singer who's more than able to hold his own. Sometimes there's a bit of Lee and sometimes a bit of Pete. Just extremely well done, guys!

Ninety Nine And A Half (Won't Do)

"Got To Have A Hundred", this is 100 (percent, that is), don't fear. They don't slack (and won't throughout this EP). Since Archie hasn't replied to my question regarding the recording conditions, I'm still feeling my way around in the dark. Suffice to say, the sound quality is very good and suits my tastes. Good performance and the sound to match, what else do I want?

If I need to pick one track which closest resembles Dr. Feelgood, it's most certainly "Monkey" ... or "My Buddy Buddy Friends" ... or "You Don't Love Me", you get the drift. What else can I say but another top rendition of a well know song, performed ages ago by our alltime favourite band. 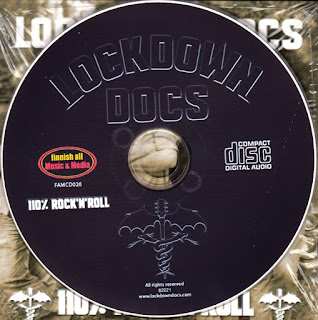 No idea where this is coming from. The Lockdown Docs make this into a Dr. Feelgood cover, even though they never (to my knowledge) played this. It breathes this British R'n'B style that we all know and love. Do I think of Dr. Feelgood when listening to this track? Certainly, without a doubt. At second place! First to mind comes the Ronski Gang. Every song that uses the word "shake" more than three times is ingrained in my brain as a link to the latter. You just need to understand that they have a handful of songs in their repertoire that make "shake" almost their sole lyric. I can understand how this became some sort of cult in Finland.

Again, excellent guitarwork and vocals plus an engine room taking no prisoners. I'm spoilt. I wish more CDs would be like this. Not necessarily covers (although I glady accept it in this quality), but original material would also be very welcome (two originals are on their first CD/EP). Sometimes I'm talking about music to people I know and if they don't know me very well and I have to explain what I'm trying to find in a song (and its performance), this must be it. Maybe to a lesser extend the song itself, but certainly one for the ability in delivering the thing.

And here we are, bidding farewell with another classic. Six tracks to the highest standards and not a dud in sight. This is so much to the point, it's amazing. Granted, you have to be into this kind of music to really appreciate the value. The question remains, what would I have thought if I didn't know who's playing here (at least the 50 % that I know)? Rest assured, I would have asked just what hit me. The Lockdown Docs? What's their back catalogue? They must be active since forever (which, in a way, some of them really are).

I hesitate to call the Lockdown Docs a cover band (which they obviously are), as they are on a level far removed from your average copycats. This is now ten songs in and I hope I'll see the band one day in a live setting. They must come down a storm. Keep on rocking and show the world how it's really done!