Finnish legends Hurriganes are no more, but they're still spoken of highly in their native country (and elsewhere in the world, where good music is appreciated). I'm being told that it is mandatory in Finland, for every household to own at least ten Hurriganes albums and play them on a daily rotation. Just let me tell you, don't go anywhere near Finland and tell them that you're not a fan of this band. I hope you've made your last will up, before setting out on such a suicide commando.

When one has thought to have heard everything Hurriganes, up comes a live CD. Don't fret about the booklet, it's all in glorious Finnish, which could well be Chinese to me. That is to say, I haven't got a clue what it says. I suppose it's the Hurriganes' story. What you get here are eleven tracks, played in the Hurriganes style. As much as I applaud such a release, there's some aspects that need closer inspection. In a way, the Hurriganes are, at least to me, an original band. Their covers always having been few and far between. Here they come up with eight and a half covers (out of the aforesaid eleven). That's a bit on the lazy side. Although I do admit, that they are delivered excellently, there's no doubt about it. 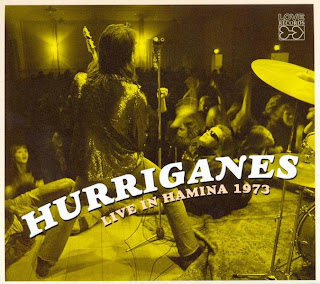 The line-up is Remu Aaltonen, Cisse Häkkinen and Albert Järvinen (the band had some changes during their existence). With regards to soundquality, well, it certainly wasn't the Rolling Stones mobile unit to catch this for the enjoyment of future generations. While it's not exactly bootleg quality, it's no HiFi sound either. You don't want to test your stereo with this one. One of the "original" tracks is "My Sweet Lily" and, I'm sorry to say, well nicked is still stolen. But these are minor quibbles when you think about what the album has in store for you. An excellent performance of a band who has rightfully earned their status as a legend. Rock'n'Roll Hurriganes style. Well worth a purchase, despite my nagging. Released on Love Records LXCD 677 in 2011.

Have yourself a rockin' great Christmas and lots of good music in 2012 and beyond.


Here's a short bit I found in the X-Mas issue of Record Collector (http://www.recordcollectormag.com/)

Kraftwerk – Ralf & Florian
Pioneers of electronic music made in , Kraftwerk, were quite a number to be reckoned with in the early 70’s. The fact, that  they sold out from (and including) “Autobahn” onwards is a completely different matter. But before that, their records were even played on the radio. These were the days, when radio wasn’t as streamlined as it is today, although there were no private stations (with the exception of a few faraway pirates on mediumwave), the range of music that was on offer  was quite incredible.
With their first three LPs (“Same”, “2” and “Ralf & Florian”) they set the controls for a myriad of plagiarists to follow in their electronic trail. But they took to easy pop music with the success of “Autobahn” and they followed that path ever since. The beginning was electronic avant-garde and the band was never more creative than at this stage. Ralf Schneider and Florian Hütter, the duo that is Kraftwerk, however, don’t acknowledge their early work. It seems to be embarrassing to them, to be connected to the first three albums and so far, they have steadfastly refused to give permission for a reissue on vinyl or a first on CD. All the CDs you can buy of these albums (or the vinyls that are flooding the market) are counterfeits. Not a single one has been manufactured legally, no matter what someone else claims. 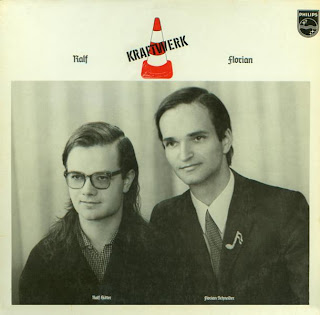 That has led to original LPs being very much sought after on the collector’s market with “Same” and “2” going usually for a little less than 100 EUROs, while the “Ralf & Florian”  vinyl can climb to a healthy 300 EUROs on a good day. While the first two albums were in my collection since they were originally released, the third one has been missing and I really don’t know why I held back on buying this one decades ago. A measly CD counterfeit was all that found its way into my collection. That had to be rectified and I really had the intention to buy a copy the next time a decent piece of wax was in my field of vision. It did take some years for this to happen, but recently one of my favourite record dealers had just the very item I was looking for, for sale. It wasn’t cheap, I can tell you, but considering what some folks pay according to popsike, I think I made a good deal. Clean copy (m-/m-) and with the poster included.
And what’s best, I can now listen to a seminal album in true style. Not your counterfeit CD or MP3 file, but to enjoy it the way it was meant to be listened to way back when electronic music of that kind was still in its infancy. I still wish they’d one day release the ancient stuff on CD or a re-release on vinyl. Every now and then, there’s someone claiming that exactly such a project is in the pipeline. I don’t think it’ll ever come to that. In the meantime, “Ananas-Symphonie” anyone?
Cheers
Posted by Devon at 6:37 PM No comments:

If you're one for cover versions, than this one's for you. Twenty, more or less well known tracks are presented here. You haven't heard of most of the artists being on record here, exceptions being maybe Sylvie Vartan, Los Salvajes, Cindy & Bert, Joy Flemming and the Supremes (who cover one of their own songs). All titles on offer were originally sung in English. Here you get versions in French, German, Spanish and Italian. 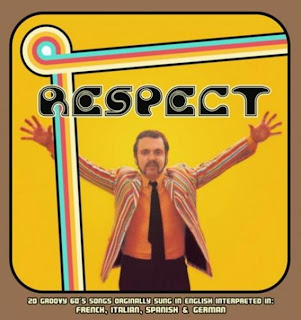 If you can't take "Der Hund von Baskerville (Paranoid)" or "Muy lejos de aqui (We Gotta Get Out Of This Place)", then you'd better put your Kelly Family platters on the turntable. But if the strange, weird and wonderful tickles you, than you can't go wrong with this collection. Most songs are known even to someone who's not a hardcore music freak ("Popi - Fuoco (Fire)", "Chao Chao (Downtown)" or "Der Feuerstuhl (Leader Of The Pack)".

According to the Wilko Johnson Website, there's a book about the man coming up

QUOTE
Described by Wilko as a "fractured autobiography", Looking Back At Me, written in association with Zoe Howe, will be published to coincide with his April 2012 UK tour.
UNQUOTE

And there's also some Dr Feelgood stuff in the pipeline

QUOTE
In April 2012, EMI will release a boxed set of three CDs and DVD. The CDs will include a mix of the first four Dr. Feelgood albums, and previously unreleased material.
UNQUOTE

Which makes me wonder, how much unreleased material is there in the vaults? Here's the link to the site, if you want to see for yourself: http://www.wilkojohnson.org/

Devon
Posted by Devon at 8:54 AM No comments:

Larry's Blues Band - Nothing But The Blues

... and you can take this at face value. No fancy funk excursions or heavy metal thunder. None of this "look here, I'm Mr. Fastfinger, I've no idea about the Blues, but as long as people believe it, I'm going to milk this cow dry" thing. No, friends and neighbours, this is Blues the way it should be played. No breaking of landspeedrecords on the guitar, just fine instrumental works. Larry Schmuki is some kind of legend in the Zurich Highlands. Talk about being a householdname! About everyone you're talking to up there goes "ah, Larry, of course we know him"! You try the same around where I live and people go "Larry who"?

I got to know his music via some friends who put me on to Trust, a band Larry had been playing with. Up until then, I had the idea that Blues wasn't even dying, it was simply nonexistent in this country. The Trust CDs are probably out of print. If you see one, buy it. Don't think twice! His current project (has been so for a few years now), is his Blues band. If I'm not mistaken, this here is the third release on CD (that's all there is in my collection). The Blues played here is electric, make no mistake. And it's not the laidback kind of Blues that makes your feet go sleepy. It's to the point and musically excellent excersised. Top craftmanship! Hard to compare it to any other living Blues player, I just can't think of a good example. Or rather, the ones that I can think of are equally unknown, so as not to be of much help. 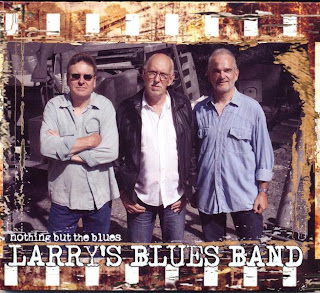 There's a certain Swissness throughout the album. I can't point my finger at it. Is it the singing (good voice, no question about it)? There's not much of a foreign accent here, just maybe a tad to exact. Of the fourteen tracks, ten are originals and also for this, the album should have a chance to rotate in your player. The songwriting is top stuff and up there with the best. On earlier releases, the balance between covers and originals was more in favour of the first. There's some video footage available, just check the usual places. Their website is at www.larrysbluesband.ch, where you also can order their CDs.