A local band hauling from the Basel area but well known throughout Switzerland. Their first record was released in 1987 and here we are in 2021 with their 5th offering. You can find their complete discography on Discogs: https://www.discogs.com/artist/2447829-The-Glorias. The first two albums were LP releases only, while number 3 and 4 came onto the market as CDs only. The new one is a CD and LP release and if I’m not mistaken, the CD is limited to 300 copies while the LP has a mere 100 copies on the clock.

The band set out to play (more or less) Garage Rock, at a time, I have to add, when the genre wasn’t in very much high regard around here. The Basel area is, musically speaking, a strange beast. Blues and Bluesrock is almost non-existent (made by local bands, that is). Of course there are exceptions, but if you want to go for the aforementioned styles, you better search for your daily fix around the Zurich area. Likewise, if you’re into Rock’n’Roll or Rockabilly, you’re better off looking to our compatriots in the East. 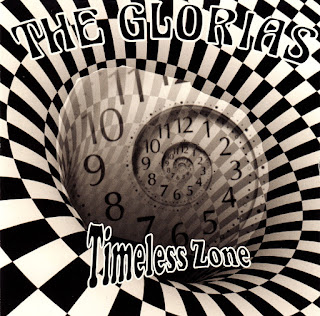 But if Independent, Rap, Hip-Hop floats your boat, welcome to the hamlet called Basel. Even Jazz is hard ground for artists around here. And so it is for bands flying the flag of Garage Rock. And the Glorias have done so for the last 33 years. Five albums in all those years doesn’t sound like much, but they’ve been living on a shoe-string and privately pressing and distributing these records, they’ve not come to riches. Almost no band in Switzerland does, as a matter of fact. The exceptions like Yello, Krokus etc. are few and far between.

Garage Rock, in a way, is a genre to me, that’s as conclusive as Psych, Prog etc. I’m never buying records because of those styles but I have bought hundreds of these that are sitting nicely in my collection. The point is, with Prog, I get mostly goosebumps. Psych is the same, I’ve had discussions with Psych collectors who tried to explain what the genre really is and I either nodded off or came to the conclusion, that they didn’t know what they were talking about. A Psych expert who needs an hour to smokescreen a definition? Give me a break. In a way, I believe, the same happens with Garage Rock. Just too many views and opinions and three Garage Rock collectors come out with 15 different definitions.

That said, I have a pretty good idea, but the genre is a catch-all phrase and I listen to this kind of music because I like it, not because it’s this genre. So, take the following with a grain (or a spoonful) of salt. With my limited knowledge of Garage Rock, I tend to realize that the Glorias have come a long way from their origins. Traces of Garage are still there, but it seems the band has considerably branched out. The track „Timeless Zone“ sounds like a Raga. You could be meditating at the beach in Goa. O.k., with more than eight minutes, this is an unusual track anyway (at least for the Glorias). If I’m not completely mistaken, I hear even traces of Psych in the last song (that’s me, no idea and still twaddle like a know-it-all). 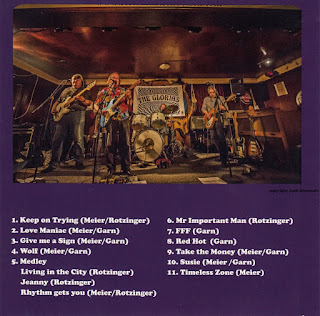 „Keep On Trying“ (and others) has a kind of 60’s feeling. A bit on the Kinks side, if you want to know. Garage? 60’s? Kinks? I believe I nailed this one. „Love Maniac“ is next: More between 60’s and 90’s. Traces of punk and the urgent feel of a song being shouted at the masses. Excellent guitar work. No idea who’s guitar this is, Bernie’s or Marco’s, not much else to choose from. „Give Me A Sign“ is up: A word about the quality of the recording, although these are essentially homestudio recorded tracks, the quality is excellent. However, I’ve only listened a few times to the CD on my office stereo, still have to drag this over to my main equipment. And believe me, normally there’s a difference between the two that you can immediately notice. The main one is much brighter, has a better bass foundation and an overall richer sound. This track is probably the most garagey of the lot. 70’s with gimmicks on guitar and a sound that would make Gary Moore cry (ca. „I Still Got The Blues“).

Track number 4 is called „Wolf“: Another thing about the music, I like it very much when the instruments are kept separated. Not a mash like some NWOBHM (sorry Bernie), this here is perfection to me. For the life of me, I can’t decide which direction this song takes. Traces of this and that but I’m not sure. The singer can wail „I Don’t Get The Blues“ until the cows come home, I haven’t got a clue. The next is a Medley consisting of three separate songs, namely "Living In The City“, "Jeanny" and "Rhythm Gets You“: Again, a bit of the 60’s and harder edged bands of the time. I’ve heard such production for the vocals before. Very well done. This is one to wear the colours of Garage Rock proudly. 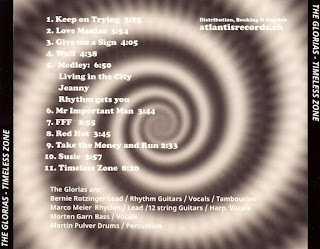 „Mr Important Man“: I believe, we’re stuck in 1967/1968 as this sounds very much like those times. O.k., the guitar wouldn’t have been played as is, back in the day. This is more modern and 1992ish. „FFF“: The wider Pubrock scene comes to mind. Eddie & The Hot Rods“ and New Wave. „Red Hot“: Now, this is more New Wave than anything else. The Cure seem to have given a helping hand. Early Cure.

„Take The Money And Run“ is the next one: A touch of Dr. Feelgood and the Pubrock scene during the first half of the 70’s. Remarkable to realize, that all these songs are originals (not a single cover version). „Susie“ is the second to last on offer: Again, more in the Dr. Feelgood vein of things. Musically excellent and on top.

“Timeless Zone“ has already been mentioned at the beginning.  See scan for tracklisting and line-up. I’ve seen Morten Garn (Bass) years ago in a Dr. Feelgood coverband. I still have recordings here. They were the deal (as far as coverbands go) and I enjoyed their live shows as well as the CDs. Morten has been a member of the Glorias for years and years. As for Bernie Rotzinger, he’s the owner of the Atlantis Record shop in Switzerland: www.atlantisrecords.ch or on Discogs, where he trades under the name rotzinger - you can order the Glorias CD directly from him (and, I believe, there are a few of the other items still available). Bernie ships abroad (Paypal, Cash, Direct Credit Card).

Btw, I don’t want to hide this, I’m a regular customer at the Atlantis Record shop but I don’t have a business interest there. I’ve made this review as a fan only.

Pete Gage & Doctor’s Order – Down By The Lakeside (CD)

I believe Teppo did tell me about this gig on May 16, 2009 in Järvenpää (Finland). Way back when. What I didn’t know, that there was a recording of those proceedings gathering dust in his archive. And just this has been made available in a very limited quantity on CD. Get it while you can at Blues-Shop.fi FAMCD25. Well worth it and a must-have (before I forget to mention this).

Talk about a neutral reception of this CD. Certainly not, throw your even handed approach out of the window (and don’t forget to open it before you do so). Who says you have to be fair and impartial? Urban myths, that’s all. When I heard of the existence of this recording, I did have skyhigh expectations and I knew that no matter what, these would 100 % be met. And let me say, I was not disappointed. Disappointment didn’t even come into the equation and a balanced view is for cowards. 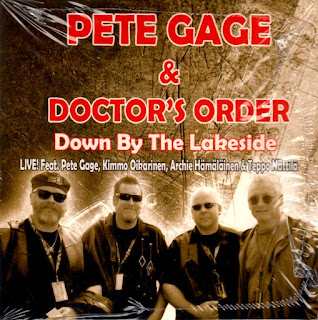 Pete Gage and Doctor’s Order  take a place at the front row when it comes to my music taste, there’s no doubt about that. I didn’t expect that my attention span, by listening to this CD, was so torn between Pete and the band. It took a while for me to get settled and after a few run throughs I was able to enjoy the offerings as they were meant to be. First I mostly listened to Pete and had 99 % of my concentration on his vocals. Next I listened to the band. What were they up to? Don’t get me wrong, they are a match if I ever heard one. This is just me, it’s hard to split your loyality, when you’re in my shoes, with both of these artists.

What can I say about the music? The track selection is geared towards Pete Gage (of course) ca. Dr. Feelgood, even though Doctor’s Order are no stranger to these songs (see full list in the picture below). The band is up to the task and delivers a tight set, really setting the stage for Pete. Uncompromising, solid, on fire and just plain fantastic. Well done Kimmo, Archie and Teppo, you really shine. And Pete himself, just great, so bloody great! The way I do remember him from the days way back. To me, his way is very distinct and carries over to his solo outings as well. This set is more of his rocking side, while the later solo stuff is more the bluesy and ballad stuff. But the voice is there, make no mistake. 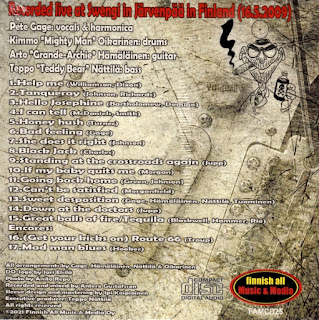 Listening to Doctor’s Order without any of their original songs in their set is a bit strange, but doesn’t distract at all. They do lean in with their combined weight and are always on top. Track 13 „Sweet Disposition“ is a joint venture (Gage, Hämäläinen, Nättilä, Tuominen). The CD gets a double thumbs up on all counts.

A sad point: Kimmo „Mighty Man“ Oikarinen (Drums) has recently died. So this is a fine farewell to one of the good guys.

At the beginning of 2020 I decided to get my arse to the U.K. and go to a Pete Gage gig (and if ever possible see if I can make a Ruzz Guitar’s Blues Revue as well). Doesn’t look like 2021 will allow me to do so. 2022? Come one, don’t let me be sitting here, twiddling my thumbs. I do know humankind has other problems at this time, but shine a lttle light, will you?