The original Janus "Gravedigger" is a release from Germany (1972) and commands quite a bit of cash if you want to own one, wether pristine condition or not. There's also a legal CD available and ... some counterfeits. I've made myself clear about where I stand with regards to counterfeits (as opposed to bootlegs), but usually it doesn't raise my bloodpressure at all. Except when I see, that folks are being taken advantage of.

Now, this record is a staple in my collection (at least the CD version) for decades and I managed to buy myself an original copy by shelling out the appropriate amount of cash a year or so back. But when I see that some guy is trying to be smart and sells his stuff as the original in the hope that he finds someone who can't tell left from right, this is where it gets my attention:

This here is plain fraud. There never was a coloured original version of this LP (note, that the seller claims this is a 1 (which I read as first) press (pressing).

Also note his sales drivel about how rare this is (you wish!) and how this is supposed to be a collector's item (right and the devil is a squirrel). The nearly EUR 280.00 are a bit on the lower side for a top condition original LP, but way off for a counterfeit item such as the one on offer. Discogs says this: 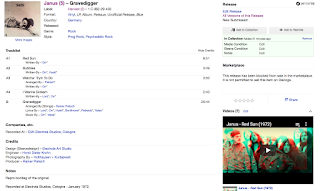 Sales not allowed! We can discuss the integrity of the Discogs database until the cows come home, but at least they mark something only unofficial if a label or an attorney or whatever has contacted them. But here's another database (where this is marked as bootleg - sorry, they don't know the difference between bootleg and counterfeit - musiksammler.de)

Now, if you ask me, this counterfeit version is, at a guess, worth maybe all of EUR 20.00 and no change. Don't tell me the seller doesn't know what he's trying to flog off here. Those kind of sellers get on my nerves, can't stand these guys.

Just today the mailman rang twice (only once, in fact) and here I am, owner of the Dynamites box "Too Late: The Complete Recordings". This is all rolled into one: Great haptics, a benchmark in the history of Swiss Beat/Garage of the 60s and especially the Basel area and one item you have to put your false teeth back in, when you try to explain to your grand-grandchildren what the Dynamites meant for the Northwestern part of Switzerland.

And it's bloody value for money on all accounts: 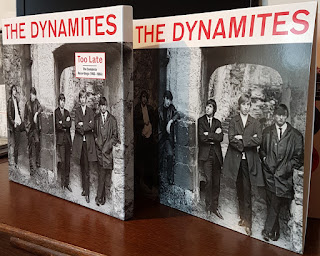 Here's the box plus the gatefold sleeve. Class A+ 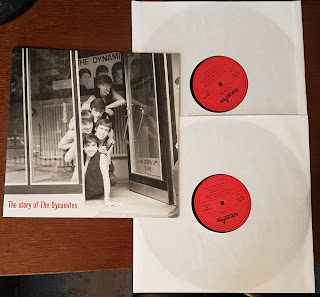 And here is the booklet (40 pages) with the Dynamites story and lots of pictures (the story is written in English and you only stumble upon German for handbills, posters and the like, which were scanned as is). Plus the two 12"s, of course. 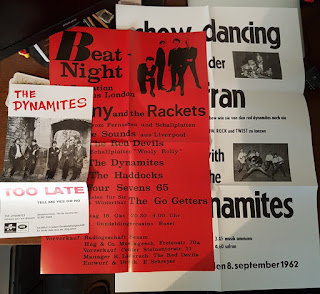 Plus three posters, reprints to give you the full value.

I haven't listened to the records as of now, but the weekend is ahead and I've nothing else lined up, so ...

What you get here is a beautiful item for your hard-earned cash. It might be difficult to find in a record shop near you, but if you're desperate, just let me know and I try to find a reliable source where you can purchase yourself a copy. Maybe there's even a listing on Discogs (haven't seen one yet, but who knows).

Roland
Posted by Devon at 2:19 PM No comments:

Quel surprise, NBZ with an all original set of songs on the market! After you thought they had packed it in and released "Best Of"s and endless "Live" ones and not an original idea in sight, there you are, pray for forgiveness and swear, you'll never ever doubt NBZ anymore. O.K., they let you down the last decade or so (well, yes, "13 Shades Of Blue", but I need to exaggerate a bit or I can leave it well be) and then, this here. A dozen new and original tracks on CD and, can we just have fanfares from the tower, please, on LP(!). Bloody hell and high water! NBZ release their new album on vinyl as well, when it's been a digital wasteland with them for around two decades. Well, in fact, it's been a cool 26 years when the band last released anything on vinyl. Get me paint and a ladder, I have to draw a big cross on the ceiling. 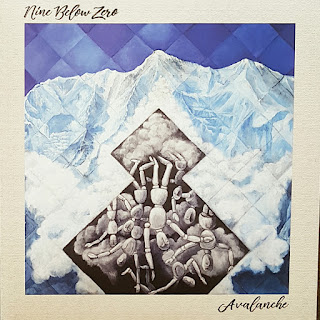 And if this wasn't enough to leave you speechless, NBZ throw in another 2 songs in the form of a 7" (not included on the CD). 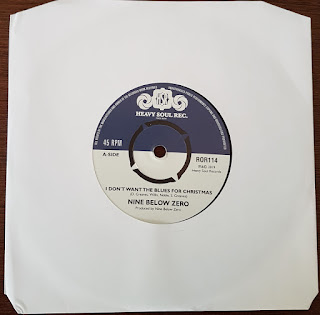 You can spin this one when the whole familiy is sitting around the Christmas tree and everyone and their dog gets on each others nerves. Of course, I need time to let the music (and the fact that it's been issued) settle, but from what I've heard so far, I have to agree with someone who said, this is NBZ laid back. Not the Phil Collins idea of laid back, but the Nine Below Zero way to do it.

And now, everyone with ten "Hail Marys".

Roland
Posted by Devon at 3:58 PM No comments:

My first Sheapes 7" (I almost wrote, my first banana - but that'd be a GDR joke). Apparently three singles in the mid 60s and then radio silence. Another of these bands from the Northwestern part of Switzerland, read Basel and countryside. All 7"s by the Sheapes are very hard to find and if you hold one in your hands, expect it to be either battered to death or incomplete (by incomplete, I mean, no picture sleeve available).

Well, mine plays nice although there's some background noise, which disappears completely, once the music sets in. There are some gray stains on the vinyl surface, but I'm not sure where this is coming from. No amount of cleaning the 7" got rid of these spots. Actually, I believe this is a manufacturing error, as was the case with so many records pressed in Switzerland. Either the local (Swiss) record plants at the time were incompetent or just didn't care. My money is on both counts. 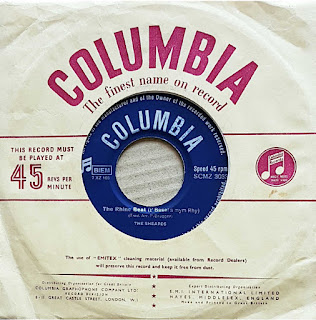 The A-side is a local ditty called "z'Basel a mym Rhy" which translates as "In Basel at my (River) Rhine", here it's called "The Rhine Beat", however. In my book, I can live to the end of my days, without hearing the traditional song one more time in my life. I'm just plain tired of this, especailly since you can't get away from it, carnival or otherwise. This is a rocking rendition of course, but really, totally redundant and, I guess, even back in the 60s nothing to write home about. The B-side is a track called "Black Cat" with credits given to P. Brugger. Whatever, but this song is not composed by P. Brugger. No way! This is a very well known track from back in the day, I just have a bottleneck in my brain and can't point out the original song (even though I should).

My copy has a generic company sleeve only and I read on the internet, that just about 50 copies were released with a picture sleeve and the rest came in a generic one (I'm picking my words carefully here, as it's not clear wether generic sleeve was actually a Columbia one or just any other old paperbag). One thing I learned only recently was the fact, that in the 60s, Columbia, Philips and other major players pressed records also on a client basis. That is to say, records bearing Columbia or Philips haven't actually been released by them, they just pressed the lot and got paid for it. So, bands like the Sheapes were never a Columbia signed artist (this is a privately released 7") and the Slaves were never attached to Philips. There's a ton of others.

I still retain a copy of this very single on my wants list, if only in the faint hope of getting a picture sleeve one day. As for the amount paid, it was more than a fair price, even considering the condition and the missing picture sleeve. Now, I'm going to check out the B-side once again, hoping to find the original track.

Roland
Posted by Devon at 12:46 PM No comments:

Dynamites- Too Late: The Complete Recordings - No. 220

Dynamites- Too Late: The Complete Recordings

I don't believe I'm jumping the gun here, in fact I held back until now, because there are at least two online shops having this one already listed (with a street date of December 5, 2019). The Dynamites! From Basel! From the 60s! I won't be saying, I never expected this to happen. I didn't! Not even thinking about it, the sheer possibility was exactly nil and I'm not into daydreaming.  I managed to get an almost complete run of their singles and that has to do. Not even wasting a half thought on a new release (as in old) and then, a while back, I was told that something was in the pipeline.

About two weeks ago, another message, stating that the release was due this week. Read on:

Well, friends and neighbours, this is a major, major benchmark in the history of Swiss Beat and Garage out of the 60s and of course something to write home about for everyone who's into that kind of music from, especially, the Basel area. Where does this leave you, you ask! You might reside in London, Chicago, Helsinki, Tokyo or Cairo, it doesn't matter, music is a universal language and even though the Dynamites have written local history only, they will conquer every record collector's shelf (and heart) with this release here.

Jesus Christ on a skateboard, the Dynamites!

P.S.: And talking to shop owners in the area, their excitement is as high as mine's.
Posted by Devon at 5:03 PM No comments: