There's a three page review of the set in Uncut May 2012 (including Wilko Johnson interview) and they give it a 9/10 rating. Interesting text btw, not just your 08/15 piece of hot air. I'm just beginning to ask myself, why is it, that despite the very high profile of Dr Feelgood (at least during the last couple of years), there's hardly anything available in the shops. If, and I mean "if", there's a Dr Feelgood section at all in the racks, you see probably about two, three CDs at the most. And it's even worse when it comes to Wilko Johnson. Most outlets don't seem to have this on offer.

Yes! Yes! Yes! I don't care much about the umpteenth remastered version of the Dr. Feelgood canon according to Wilko Johnson, but this gave me the shivers. I only hold a promo copy in my hand and this consists of the three CDs sans DVD. Speaking of which, I believe I have seen more or less the complete footage on there, but I'm holding out for my commercial copy to make it through the post channels, and hopefully, the visual quality is better than the VHS can provide for, taken from tenth to twentieth generation tapes. 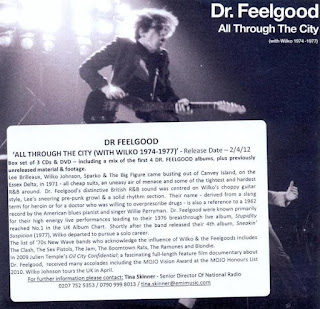 As for the audio part, I'm not sure when I'll be listening to the remastered (2006 and 2012) and live tracks. I'm not one giving myself a headache trying to figure out what's different from earlier releases of certain tracks. This is Dr. Feelgood in all its Wilko Johnson glory and the tracks to go for are on CD 3 (01 to 13). Bloody unbelievable! Tracks I didn't even know Dr. Feelgood had recorded ("Everybody's Carrying A Gun" or "Casting My Spell On You", both of which I had firmly placed in the Wilko Johnson repertoire only) or some instrumentals that I'd never thought I'd hear from our heroes. In the truest sense, these glittering diamonds are leftovers that were probably not considered good enough way back when, but today these outtakes are an archeologists dream come true.

These thirteen tracks alone make this boxset an item, for the true Dr. Feelgood fan, that's not to be missed. I believe, even if Wilko Johnson makes it true and releases a new CD this year with all new songs, this here is still going to be the star of the ticker parade for 2012.

Erny died just over a year ago, on March 25, 2011. He was certainly one of the good guys and happened to be the drummer in Action, the early seventies band from Zweibrücken/Germany. I'm glad I got to know Erny and to have witnessed the one off reunion gig of his band in 2008 (http://www.drfeelgood.ch/action.htm). Here's a clip from this performance (with a new singer).


There are more videos from this concert where this one is coming from. Erny, you're still being missed! There's a CD available (Garden Of Delights CD 149) with the original tracks from 1972 plus a few bonus ones from their 2008 gig. At the time, Erny did also release a DVD of the event. I'm not sure this can still be had, try your luck.

P.S.: Just found some newspaper clips on the internet, apparently there's going to be a memorial gig, which is supposed to be an annual event. First one will be on April 14, 2012. Can't make it this year, as I'm already heading to some other place, but I'll make sure, I'll be there in 2013.

Devon
Posted by Devon at 9:49 PM No comments: