Right, I've been buying records for a long time now. I've made some excellent catches and spent a lot of money on pieces of plastic and a bit of paper and cardboard. Some I can remember to this day, others are lost in the mists of time. The former are the highlights and there are quite a few, especially when it comes to Dr. Feelgood, Wilko Johnson, Krautrock and Jazz. But what I experienced only recently beats every other instance of crate digging (even Utrecht pales by comparison).

A few years back, I started to buy and collect sixties Beat bands from Switzerland and with an eye on local groups, that is to say, outfits from the Basel area. At the time, this was a very closed market and success went as far as a gig in 25 kilometers distance from the band's practice cellar. There were very few bands who made a name for themselves in the whole of Switzerland (this is a feat in itself, considering the small place). Even to this day, folks from Geneva are looking for 60's bands from the French speaking area, folks living in the Northwest country are in for their own local heroes and collectors from Zurich will hear of nothing but their backyard outfits and so on.

Scarcity is the main problem in acquiring the appropriate discs, the other point is that most of these, I have to stress that, very rare records are hard to find, are usually in a deplorable state and third but not last, they go for insane amounts of money (even in bad condition). However, I walked into a local shop and came out with those monster records. 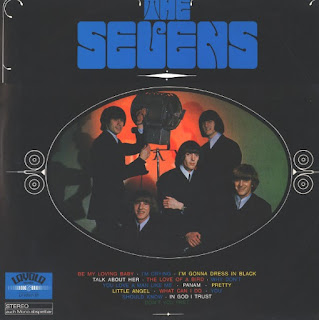 An original LP! There are a few re-releases (also in my collection), but this is the real deal. Actually, an original copy has been on my wantlist for at least 15 years (if not longer). I've seen a copy in Utrecht once that was offered for double the amount and was rather thrashed. I declined then (not because of the price, but because of the state of the record). I always hoped that one day I'd be able to get a decent copy and this is it. The record is a solid VG+ and the sleeve matches the vinyl. It does have a slight warp, but that doesn't bother me, as it's very minor and otherwise a top clean record. Funny thing, I never saw an offer for a totally flat record. All of these must have been to close to a heat source.

The Sevens changed their name from The Pirates, because a French outfit who called themselves Les Pirates threatened to take legal action (or they just jumped the gun - not too sure). This is the only LP from the Sevens (plus a few 7"s, of which I'm still looking for one or the other) and the music is just plain fantastic. Here you have a band with excellent (mostly original) songs and not a dud. Top sixties fare on the threshold between Beat and Pop.  Just a word of warning, don't buy the Akarma counterfeit version, this is a substandard one, copied from a VG record at best. And not licensed. Your best bet is the Feathered Apple release on either LP or CD (official).

About the price I paid for this? Considerably less than can be expected, yet still a very high amount. Let me have my secrets. Thanks. 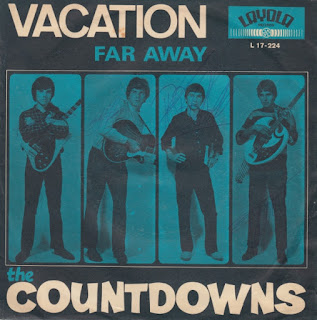 The Countdowns on 45! And signed by the whole band on front of the cover. I'm still looking for at least one other 7".  This is Beat (or early Garage) and the band has been a staple of Northwest Switzerland's Rock history ever since. While the Sevens were the sophisticated bunch, the Countdowns were the rough ones. Besides a few CDs (two I believe) I own a few other singles.

The drummer, Hans-Peter (Bölle) Börlin died only recently. After he split from the Countdowns, he played with Ertlif, another band from Basel, who went the Prog way. Not the boring Yes stuff, but Prog with hooks and twists. Ertlif have re-released some of their output on Vinyl only last year or so and you're well advised to get the 2 LPs on the market. As far as I know, the Countdowns have never re-released any of their records (except the one CD were they had some of their old tracks, kind of now and then). The other CD is a live one, but does have it's share of problems. In any case, I think both are OOP. Check Discogs or whatever, if you're interested.

About the price? The secret is safe with me, but considering the scarcity, it was a deal. 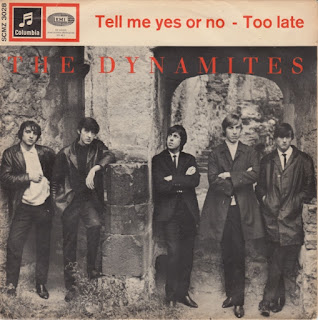 And, friends and neighbours, another band straight out of the sixties and hailing from the Basel area, please welcome the Dynamites! This 45 is one of the handful this band released and, again, no LP that I know of. This 7" goes for insane amounts (if you can get a hold of it), yet their other output is a bit cheaper. To be clear, a bit cheaper, not cheap. The music is Beat again with maybe a fraction less Garage (although it's present).

I do slightly prefer the Dynamites over the Countdowns, but this is only a matter of my form of the day, so to speak. Actually, the Dynamites as well as The Countdowns and the Sevens can be found on quite a few 60's compilations (CDs and LPs). If you're not out to get their whole output, this might be the way to go, especially, since this is the much cheaper way. Your call, but just be aware that collecting the original records, it will set you back financially. And don't forget, there are other excellent Beat Bands from the sixties coming from here, I'm throwing in the name of the Sheapes, but you'll have to dig very deep.

I'm aware, that your interest might be non-existent for these type of bands and especially for the area they're coming from, but you'll miss some of the best music you've ever heard in your life.

Devon
Posted by Devon at 9:50 PM No comments: