I'm not a big fan of cover versions. Most of the time. I accept it in Rock'n'Roll, Rockabilly and Jazz. And I even enjoy it in these genres. Exception: When a Dr. Feelgood or Wilko Johnson cover comes hopping along. I'm all for it then. There are a few bands in my collection that carry the Dr. Feelgood and Wilko Johnson flag proudly and I wouldn't want to miss one of them. Sure, it's not the real deal but they don't claim to be. I do grant one thing to all of them, they really try their best and in fact, most of them succeed at giving a good impression.

Tohtori Lounamo? Sorry? What did you say just now? Tohtori Lounamo! Until about two or three months ago, I had no idea, this band even existed. I believe I did a surfing session on Gypie Mayo and by some strange link came across this band and lo and behold, I see, that two of their three CDs are kind of a tribute to the Canvey four. Discogs is my next stop and I manage to get me a copy of "Pää Kylmänä". 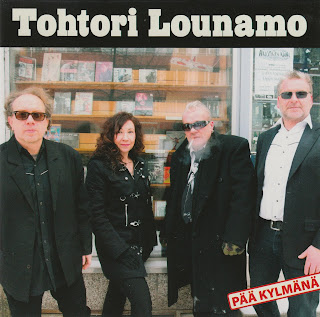 This is an almost full fledged covers only CD (all Dr. Feelgood or Wilko Johnson), except for three songs, which seem to be originals. I don't hold this against them, but I did have a tunnel vision when listening to this album. A thought came to my mind, strange, I haven't heard about them before. It's not like I don't have my ear on the ground when it comes to my favourites. And even Teppo hadn't mentioned this band to me. Maybe he didn't know about them? Well, think again, of course he knew the band and was so kind as to send me their CD "Koukussa". 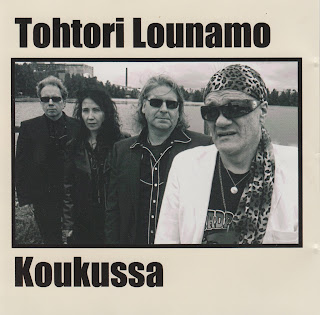 Sure, you know what Tohtori Lounamo are referring to with this covershot. Another ten (out of 12) tracks covering our heroes. Two songs are either an original or a traditional song. I'm not even starting to compare this Finnish band with their counterparts from Canvey Island, the DNA of the latter is too much ingrained in my thinking. Suffice to say, Tohtori Lounamo do a very good job and I know, I will enjoy both CDs in future.

The funny thing here is, the vocals are in Finnish. All other cover bands I know, have stuck to English lyrics. And, surprise surprise, it works, although Finnish does sound exotic in this context. Wether you want to check out Tohtori Lounamo (I believe their CDs are hard to come by nowadays) or any other Dr. Feelgood / Wilko Johnson cover band, your best bet is probably listening on Youtube (or try you luck on Discogs for physical media).