Some time back, I got this new CD "Helluva Job" from the Rockanites. You can read what I had to say about their debut album further down below. The recording has been done in June 2017! Well, that's not to say I've been sitting on it for almost a year. You see, I'm scratching together some excuses! First let me say, this CD is on a par with "Great Shakes" and all songs are originals, mostly penned by Tuomas (with some third party input on a couple of tracks).

There's a slight line-up change compared to their previous outing, but it falls all into place. Before I go on, Tuomas sent me a letter together with the CD in which he claims that this is not strictly (my words) Rockabilly, R&B or something along these lines. He thinks of it as a Rock'n'Roll record. Forgive me, but I hear (mostly) Rockabilly in one form or the other. Even a track like "Boyfriend" has that certain 50's vibe. Maybe especially this track. Even if I agree with Tuomas, this one ain't Rockabilly, but it does breathe the air of the times. Could have been written in 1958 or thereabouts. A classic! 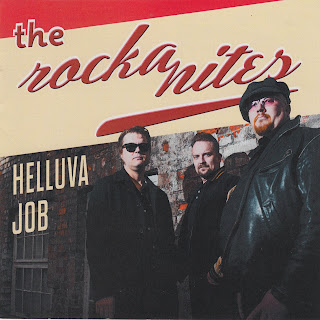 I always find it amazing when a band comes up with all original material, especially in the Rockabilly genre, where covers are the plat du jour. Nothing against a good presentation of a well known or not so well known classic, but this here is in another league. The reception of the album is a very coherent one. Well done lads! I've never seen the band live, but this is something on my to-do-list. The CD clocks in at around 35 minutes give or take.

As to the availability of the CD, I see on the www that some Finnish record stores are carrying the item. However, I think your best approach would be to contact Tuomas on the Rockanites Facebook website. Have a go at it, you know I'm serious about good music.