Back in the day, I was about the only one in our clique to give Punk a chance and my love for this genre has never waned. Of course, U.K. Punk bands were the first and in a way still the most important to me. I can still remember Swiss TV trying to film a feature story about the new Punk movement and what did they get, smashed cameras and one or two fisticuffs. It was a national joke among the cognoscenti and when I think about it to this day, it's still kind of funny. But the Swiss Punk scene was no sleeper either, a few years later, yes, but there were excellent bands and they made their mark.

Germany and Finland are some other noteworthy flags on the Punk map. Especially the German scene is something to lend an ear to. The density of class A Punk bands is just amazing and they have a living culture (music, fanzines and specialized record stores). It's about 50/50 English/German vocals, but the ones with vocals in their native language have a tough stand, because they're readily pushed into the rightwing corner, even though they might be leftwing as they come. In Germany, singing in German evokes memories of Schlager and Saturday evening TV-shows and believe me, this is not a good thing.

However, with an open mind, you can find excellent bands in whatever language. Before the week is over with this longwinded introduction, let me just say, I'm trying to streamline my collection (LPs and CDs) and by streamlining I mean, either selling part of it off or plain throwing items out. This is mainly stuff I have no idea why I got it in the first place, I'm not interested in anymore, some items I bought in thrift stores and so on. 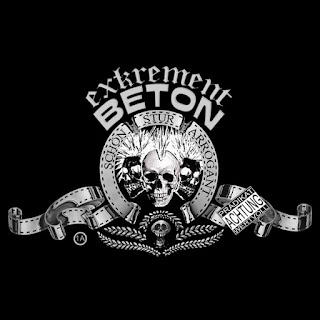 Recently I came across a CD in a pile by a band called Exkrement Beton (Album: Schön, stur, arrogant), which has been in my collection for a long time, but I certainly hadn't listened to it yet. No idea where I got this from, no idea what it was (I did suspect Punk) and I was about to throw it in the bin. Booklet and inlay torn up and then ... put the CD into the player and had a listen. What can I say, Punk from Germany the kind of I pay money for. O.k., now there's a CD without any booklet or inlay, good enough to play on my desktop stereo in my "office". And, friends and neighbours, the thing has been on heavy rotation ever since.


So much so, that I'm actually thinking to get myself their other releases as well. Actually, lyrics on the side, this is more Hardrock than Punk. A bit like a more melodic Motörhead (if you pardon me). O.k.. maybe not quite. And the kicker? I had to buy this album new again, this time on vinyl. I mean, I can try and throw everything out the window and turn on my heels and go shopping for the same stuff. Anyway lesson learned.