Doctor's Order - Out Of Order (The Lost Early Album) (CD)

If I'll ever do a list of my favourite Doctor's Order albums (don't hold your breath), there'll be a lot of pushing and shoving for the medal ranks. The task is not made easier by this beauty that has found its way to my letterbox recently. Thinking back to when I got the "Doctors In Disguise" out of the blue, I had a déjà-vu of sorts. Unexpected is the operative word here and what a surprise. I get to hear Doctor's Order before they went full flight. Teppo likes to keep his cards to himself, but I don't count this against him. 😀 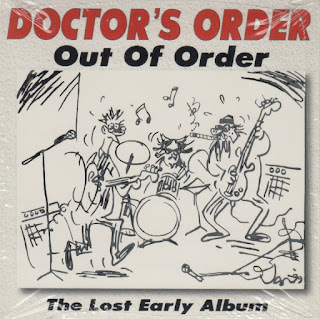 You all know the band that started out with Archie, Timppa and Teppo ... hold on, fast backward ... I'm racking my brains and I'm sure Teppo mentioned once (might have been after the 6th pint though) that there was a Doctor's Order incarnation even before that debut album that I came to appreciate and value so much. And now the first incarnation of the band under their trademark name. Because I didn't know this was coming, I certainly had no idea and no expectations as to how this band would have sounded. Please see the previous entry, at that time there were only 14 (or less copies) left of this 100 copy edition.

I started off by asking myself how the band sounded (not in a HiFi-way, but song-wise) with no Archie at the guitar strings. First let me tell you, the band sounds more Dr. Feelgoodish than at any time later. I don't think this is a copy and paste thing, far from it. Jari does indeed a great job here and I hear Wilko Johnson all the way through. This is, to my ears, not set up but organic as can be. Him and Archie seem to be two guitarists coming from quite a different angle. There's no comparison possible, while Jari has only this CD to show his talent, I've seen Archie a number of times (not to speak of all the media in my collection). Archie can possibly play whatever is required at the moment and at an impressive level. Jari is excellent at what he does here, but I can't speak of how complete a guitarist he is (which is beside the point anyway, if I think properly for a second). 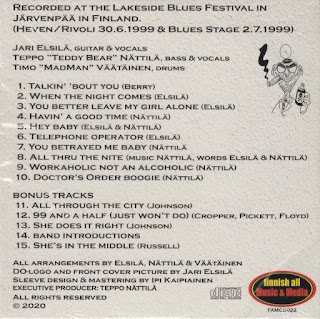 Going forward, I think of this as Doctor's Order Mark I and the follow-up as Mark II. That's to say, each version stands on its own. No need to make one's life even more complicated. Another thing: The vocals are shared between Teppo and Jari and believe me, this makes for a hell of a difference. In a way the flow is easier and more relaxed and they really give a lot of colour to the proceedings. When the Mark II band did their background vocals thing (seldom enough) I almost fell from my chair. I still give a thumbs up for this. 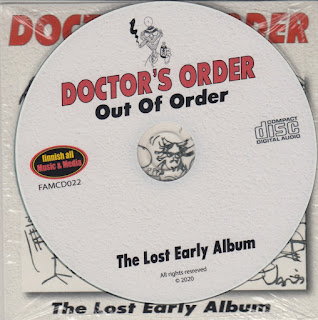 Bass (Teppo) and Drums (Timppa) make for an encellent engine room. But that wasn't a surprise to me. They just carried on in Mark II what they had finessed earlier. I'm not going into details about the tracks on offer here, just suffice to say, I enjoyed this hook, line and sinker. And besides, I've written so many words about Doctor's Order, wether Mark I or II or ..., I just want to lay back and have a good time with this one.

P.S.: A word about the soundquality: Despite the fact that these are live recordings, the quality is very good. Granted, sometimes there is a drop in level and the sound fades a bit (like you would expect from a cassette tape after some decades), but this is from an MD (so I'm told) and at a guess I'd say, that was maybe a microphone problem. Hey, it's live, it's happening and you'll enjoy it to death and I'm splitting hairs here. You'll enjoy it, believe me.

Doctor's Order - Out Of Order (The Lost Early Album)

This is just a quick one. A full review will follow asap. Doctor's Order "Out Of Order (The Lost Early Album)" is available at

The CD is limited at 100 copies and at last count (2 days ago) there are only 14 of them left. So hurry up, if you want a piece of the action. 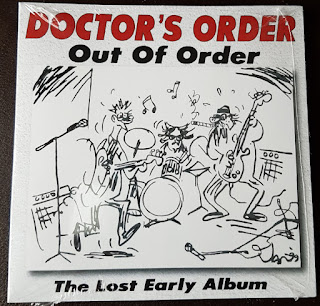 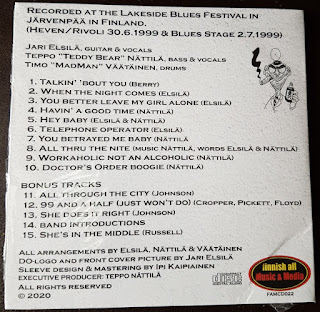 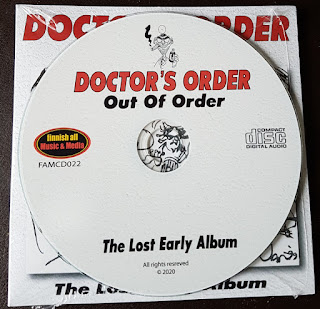 A new one from Eight Rounds Rapid, "Love Your Work". This one is available on CD and LP and has been released in August 2020. As with the previous releases, I can't quite figure out what I'm listening to. I like their sound and the songs very much and yet, I'm still at a loss. This is probably human nature, your brain files everything in drawers and if you don't find the proper one, you panic. I hear traces of Industrial and Motorik with a dash of Punk and the urgency of the British scene ca. mid-70s.

The album is very, very British. In a way, if you like the Jam, you're on safe ground. Not that they sound like Paul Weller and Co., but their englishness is exactly the same. Mind you, this is not your Sunday morning fare, your brain does have some food for thought here. I'm not going as far as to call it avant-garde, but again, you can see it on the other side of the fence. The album is perfect for me, but then, I'm a fan of Industrial, Avant-Garde, Noise ... don't ask me. 😎 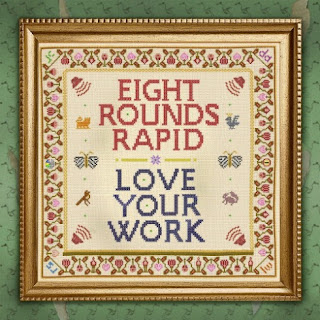 To pick one track over the other is a moot point here, since the release works as a whole ... and I might add "only". At the moment I can't imagine just listening to one song or two and be done with it. The CD/LP begs to be played at the complete duration. The 12 songs come in at just 30 minutes + and everyone with half a brain should be able to muster this attention span. And you'll be rewarded plenty. "Love Your Work" is a remarkable release and I know, it'll keep me busy for some time to come. If you have troubles finding the release for sale, go to the band's website or get it from Juno. I got my CD and LP from the latter, since I don't have PP anymore and that's all the band offers as a payment option.