Imelda May
An Irish singer who just recently has released her 3rd studio album, this one called "Mayhem". The lady has made quite a few waves and is about to conquer the world. Ms May comes along the Rockabilly route, but has gone further afield now with Blues and Jazz taking up quite a slice of her repertoire. Rockabilly is still present, but she is not what some critics call her, "Easy Listening". Not in the sense it was meant to put her down. Here's her website  http://www.imeldamay.co.uk/


There are quite a few quality videos available on the internet. Instead of going for her Rockabilly side, I've chosen one of the best ballads I've heard in years (let's make this decades). Go and explore her music.

Roland
Posted by Devon at 9:42 PM No comments:


A German Band from the 70’s, alternatively called heavy (by some “experts”) or progressive (by another bunch of “experts”). They go on about what a fine record this is, especially the B-side which also features a full orchestra and that the A-side is of a somewhat lesser quality, but still holding up to the overall excellent quality of this album, which, btw, has never been legally re-released on CD (although there is a counterfeit CD available by a bootlegger outfit called “Germanofon”). Avoid this Label at all cost. Not just because of the counterfeiting nature of their product, but also because of the inferior quality (read, mostly pulled from scratchy vinyl).


And before you try to find a decent vinyl copy for EUR 300.00+, forget about acquiring one of these as well. Take your silver bullets with you, a handful of garlic and a peg with a hammer. And if you happen to see this album somewhere, make sure to give it all you’ve got, just to make sure this is not going to haunt any collectors worldwide anymore. My gratitude to you for saving the world from one of the worst and most redundant LPs in the whole universe. Imagine Black Widow, but just with the teutonic inability to put anything into verse, because, yes, friends and neighbours, this is an album that gives you nightmares for a long time to come.


Talking about the music: This is syrupy stuff, that’s quite o.k., if it’s meant for your kids afternoon nap. Nice organ doodling its way through the tracks, being accompanied by untalented drum and guitar works. But the real icing on the cake (in the most negative way imaginable) is the “singer” and the “lyrics”.  The vocalist is this kind of deadpan German guy, you can see in Hollywood pictures about the second world war. Kind of “Ja mein General! Wir werden die Russen im Morgengrauen angreifen!”, well almost. There is no feeling there, this is about  reading the 8 o’clock news on German TV from the teleprompter. 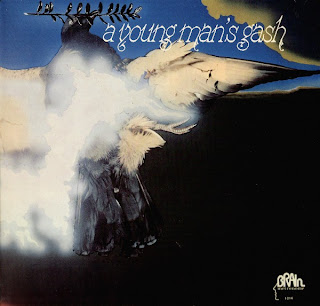 But the band has crafted their lyrics in a kind of language I don’t understand. Sometimes I think they’ve tried their hands at English, but I’m pretty sure, this is not what it was meant to be. I mean, us foreigners will make a lot of mistakes when speaking or writing in another language (as certainly everyone who reads this blog or has been over to my website or has met me in person, can attest to). What I don’t understand is, why can’t bands have some proofreader do a final check. I mean, these are just a couple of lines and it shouldn’t be so expensive for a person of English mothertongue to make a few corrections to a couple of words. But, really, if they want to go down in pophistory as the most stupid band in the world, this is their decision. It’s just, that, if you have absolutely no idea about a foreign language, you should just maybe stick to what you know. Maybe releasing a record with German vocals in this case.


There’s no lyrics here, as this would be a breach of copyright matters, but you’re invited to check out the www and laugh until your insides hurt. Interestingly enough, the LP doesn’t seem to have shifted a lot of copies when it came out, thus making this a collector’s item. But it is one of these instances, where the going rate doesn’t match the musical value. You’re paying around EUR 320.00 for a mint copy at the moment (if you can find one, that is) and all you get is a colourful fold-out sleeve and a piece of black plastic on the Brain label. Taken the music into consideration, this album should be discounted to about half a Euro. And that’s maybe overly optimistic. I bought my copy sometime around its original release in the first half of the 70’s, but I can’t recall why I’ve made the decision to pick this. I mean, I did buy some fishy ones throughout the last decades, but this one tops it all.

Ever since I bought the 1971 LP "Johnny Kidd & The Pirates", way back, when I was young, very young, I've been a Johnny Kidd & The Pirates fan. To me, the old chestnut about only two true rock'n'rollers coming out of the U.K., and one of them being Johnny Kidd, hasn't lost a fraction of truth. These songs, I can listen to, without ever growing tired of them. Although I don't buy into the statement that only Johnny Kidd's backing band with Mick Green, Johnny Spence and Frank Farley were the real deal (that would be putting down the other guys that played in other incarnations of Johnny Kidd & The Pirates), the aforementioned trio is certainly a major line-up in the history of the band and with hindsight the only one to carry the torch. 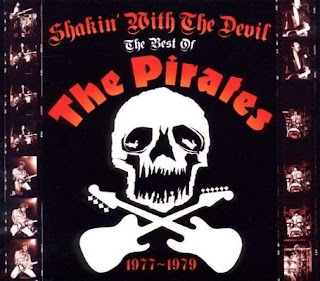 In the 70's, our powertrio got started again (minus Johnny Kidd of course - R.I.P.). And there was a lot of good music being released by my heroes (and some awful stuff, but that was, when Mick Green had a Pirates sans Johnny and Frank going). You want to stick to releases by this core trio. Take my word for it. Here's the Pirates 1977 to 1979 when they had their highest post Johnny Kidd profile. This being a "Best Of" you might go "Aw, I don't need another compilation. Got all the official releases anyway". You're dead wrong. First of all, this double CD is available for a very nice price. You're not going broke, buying this item. Second, there's some unreleased material on the CDs, including radio promo spots (although I think you want to listen to the latter only once, but it's nice nevertheless) and third, the compilation as such is very enjoyable. Both CDs clock in at a little more than 75 minutes. Excellent sound quality, double fold-out digipack and a nice and informative booklet with lots of pictures. Released on Salvo as SALVODCD219. And if you want to visit the Pirates website (well worth it), here's the way to go: http://www.thepirates.co.uk/

Devon
Posted by Devon at 7:54 PM No comments:

Alice Cooper - Welcome To My Nightmare 2

The new Alice Cooper album should be released sometime in October 2011. It's, of course, the sequel to "Welcome To My Nightmare". At least, it's marketed as such. The remaining members of the ACG have contributed to this longplayer. To what extent, I can not say. But I don't really expect a full (minus Glen Buxton, of course) outing of the ACG on this CD (not even for one track). However, it'll be the closest you'll get to the original line-up again. There's a fan pack available with the CD and some goodies such as a 132 page magazine and a current Alice Cooper interview. Plus, I think, there's a poster involved somewhere (although that might be just if you order it within a certain timeframe). The whole thing is not even GB£ 16.00 (includes postage). You might want to point your browser in the direction of Classic Rock magazine (U.K.) for more information and how to order it. And what makes this even more of a treat, there's bonus tracks on the CD, otherwise not on the album and you'll get it about one month before it hits the high street.

P.S.: I just read, that there are at least six different releases, all with bonus tracks (and you have to buy the lot, if you want all of these "bonus" tracks). Well, that's marketing for you. Thank you very much. Downloading the stuff for free, looks suddenly like an option. If only to draw a line at some point.
Posted by Devon at 8:22 PM No comments: