The Blues'n'Jazz Festival is a three day event, held right in the center of the town. Three main stages plus a few lesser ones. Wilko Johnson and band started the festivities at 1900hrs sharp and the whole set lasted just around 70 minutes. Naturally, I could have done with double or triple the length of the gig. But I really should be grateful that Wilko Johnson has visited these shores once again, and I should be even more grateful to the organisers of the Blues'n'Jazz Festival for booking our favourite guitar slinger. 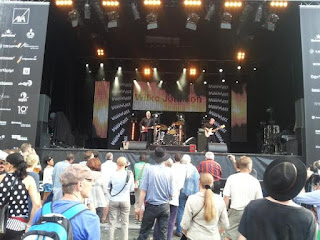 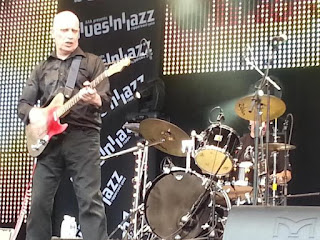 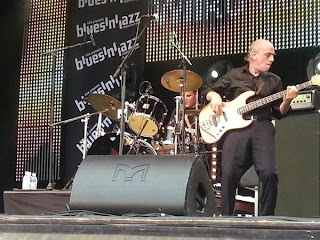 Ecellent sound, crystal clear bass, guitar and drums and all those well worn song ditties, that somehow manage to sound fresh each and every time you hear them. As the event is more like a big public party (there's an entrance fee of around EUR 40.00 for a oneday ticket to be paid, but this is valid throughout the area), you didn't have the typical Wilko Johnson fan in the audience, although I did spot a few with their well worn Dr. Feelgood T-shirts. 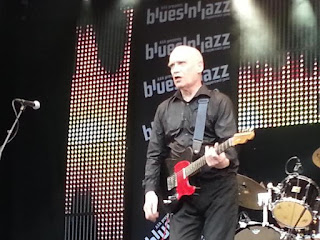 It was a bit strange to see Wilko on stage at 1900hrs in glaring sunlight, but I believe he needed to be in Scotland the next day for a gig, so he probably took the flight back the very same evening (Zurich airport is close). The band was in excellent form and went down better than I had thought possible for this kind of background. I didn't catch the drummer's name when Wilko introduced the band, but it wasn't Dylan Howe. The very same day there was also Rudi Rotta on stage and if you waited long enough, you could catch Poppa Chubby as well.

Lita Ford (of Runaways fame) has released a new album. I had my doubts about it, considering that the last offering, "Wicked Wonderland", was a b with an oring attached to it. And extremely so. I fully expected the new album to fight its corner with the predecessor. Took me on the wrong foot, I have to admit. This is actually one of the best rock platters to come my way for ,,, I don't know! The thing rocks and is a million miles away from the earlier outing. The recording is excellent and the sound is not the kind of roadwork operation that you sometimes hear with bands trying to make some sort of noise, just to cover their inability. 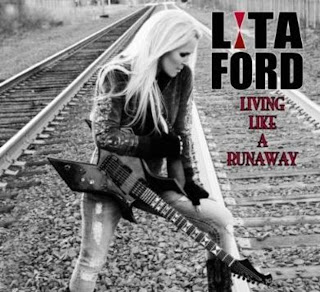 Excellent songs, there is not one filler on this album, and Lita Ford's vocals fit the performance like the proverbial glove. Excellent guitar work of hers as well, but the whole band is on top of the game. This is released as a double LP and includes a CD (you can also buy this as CD only, of course). Vinyl is coloured (mine is mainly dark red, I don't know wether there a any other shades to be found) and lets you have two bonus tracks that are not on the standalone CD. One thing that is a bit irritating, the music reminds me sometimes of Alice Cooper ca. late 80's up to late 90's. Could be my imagination only, but the songs could well be played at an AC gig (although Mr. Furnier would have to write some new lyrics, as these were mostly not really his).

Devon
Posted by Devon at 7:15 PM No comments:

Wilko Johnson - Looking Back At Me

The book has finally been released, albeit with a slight delay. It had a June 2012 street date (up from April 2012 - see #54) and I got it yesterday. I'm not going to write a review, but the haptic perception of the item is very good. Lots of never before seen pictures (and some that are familiar) with a little less text. I don't think I need to tell you to order this in your local bookshop. Enjoy! 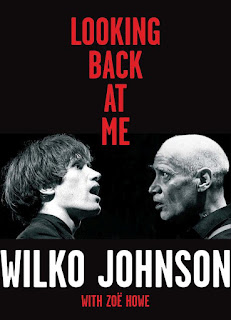 Devon
Posted by Devon at 8:19 PM No comments:

This is a 2011 release from Jungle. Live in Monaco. Until about five minutes ago, Jungle was a class A label in my books. This here is trash. Unbelievable, legit labels are still releasing recordings that make any audience tape an aural highlight. I've heard a few bad live recordings, but this one takes the cake. No selfrespecting bootlegger would release something like this. Thumbs down and in future I make sure, I listen to a Jungle release, before I buy the CD (if I'm buying any other release from them at all, that is).

I'm only at track three right now, but it feels like half an hour has passed. I'm not sure I'm going to make it through the whole CD ever. Not recommended! Definitely not recommended!

Devon
Posted by Devon at 6:05 PM No comments:

If you're like me, always looking for the strange, exotic and wonderful, you might have seen these two CDs and were tempted to fork out your hard earned cash. Batman to the rescue! Forget about it. This is a misnomer as they come. First, there's very little in the way of Rock'n'Roll on these two discs. This is more like show music that could be heard around the 60's and 70's on TV. With accompanying dance troupe. In other words, extremely boring stuff. I've quite a few compilations of 50's lounge music on my shelfs, but the stuff I have is hot, thîs here is dead. 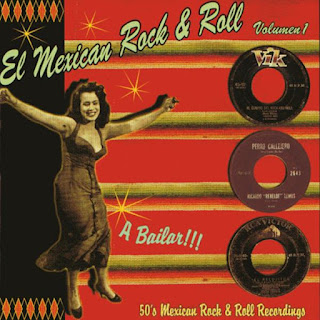 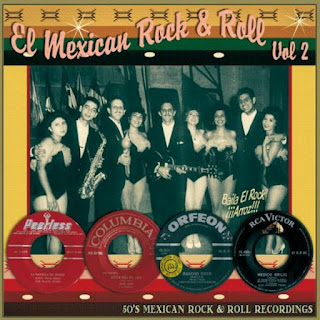 If this was the state of Rock'n'Roll in Mexico in the 50's, I'm sorry for the guys and girls there at the time. Must have been awful to be presented with this crap. Sometimes I think they are pulling my leg, Some covers of songs that have been ridden to death, are very badly presented. Of the nearly 60 tracks on offer here, only a handful can be called Rock'n'Roll. And what's more, some of these tracks are pulled from very very scratchy records, the stuff you'd get rid of, no matter how rare it is. Frankly, I don't understand El Toro, I would never have expected them to release such trash. It took me a few attempts to make it through these CDs. Buy yourself a few beers but avoid this at all costs.

P.S.: On the inlay card it says "The sound will CHARGE you!" (El Toro's spelling). Yes, I put my fingers into the next socket, see what happens!

Devon
Posted by Devon at 6:42 PM No comments: