Doctor's Order - Rehearsals Are For Sissies! Live! Feat. Juha Takanen On Drums! No. 241

Doctor's Order keep on being a surprise bag. What I didn't know until the beginning of last December, that Juha Takanen was sitting in for a few shows when Harry couldn't make it for one reason or the other. One such gig was recorded and has been released on CD. The bad news first: The CD is limited to 75 copies only and is available from Blues-Shop Finland and nowhere else. Might well be that it's sold out in the meantime. Just try your luck.

The gig was recorded live at The Baron in Vammala/Finland on August 24, 2007. I'm not going into details about the set-list. Enough said of this in previous posts. What caught my ear immediately was the live atmosphere presented. This is how I remember the band on stage (o.k., the "Einstein/doo-wop reprise" is a new one to me as well). The sound has its shortages, but you can't fault the live sound which makes more than up for it. 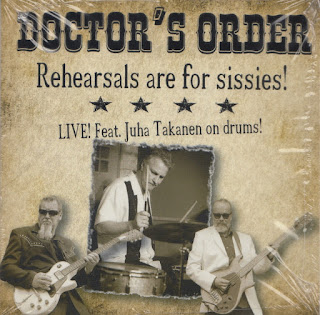 Juha Takanen does an excellent job, but I'm being told that he was/is quite familiar with the Doctor's Order repertoire. Which, in the end, came as no surprise to me. The gig itself is probably a shortened version of the proceedings that evening, since it clocks in just under the 40 minute mark. In my memory, the band almost always played at least a 90 minute set. 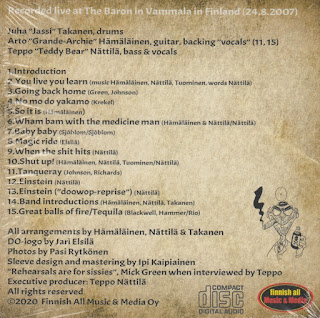 If you're like me, a die-hard Doctor's Order fan, there's no question you want this CD. It shows the best of the band at the time, delivered in the signature sound this band was so well known for (sounds like an obituary, doesn't it?). When Mick Green said "Rehearsals are for sissies!, he might well thought of "Doctor's Order are not for sissies!".