Surprise, surprise! I had thought that I had heard the last word from Dave Edmunds regarding new recordings. But in the current RC I've just read, that the man is working on a new album, to be released at the end of this summer. I had a lot on my books, but not this! And Dave Edmunds says "I reckon it's gonna be a good, consistent record that sounds like Dave Edmunds ...". This will probably released on Cherry Red.

It's the old discussion, but I'll not take it up again ... except to say, that I was a bit irritated yesterday, when I pulled out four(!) brand new LPs from all the vinyl that's sitting here, still waiting to be heard. They were all sealed copies, and imagine my surprise (and anger) when each and every of these albums sounded like they had been played with a very well worn (if not to say completely damaged) stylus. The kind of heavy distortion you get when you played your vinyl transparent. Of course, I know, there could be a number of reasons, not the least a fault in production, like a much too short cooling off period after pressing. But four albums in a row? Give me a break! I had thought that my needle had gone across the Jordan.

Even cleaning the stylus a couple of times didn't bring any betterment to the audio quality, I really thought I had shot my stylus and damaged some records in the process. The only thing that seemed a bit strange, was, that the distortions didn't last throughout the whole running times of these LPs:

Although all look like being in pristine condition, I had to double check with some vinyl that I knew played just fine. So on went

and, no, those records played just fine, the way they're used to sound. Today I've pulled another two LPs and they are

Those two sound full, excellent sonic quality and not a fault to be found with them. I must confess, yesterday's four out of four sequence had me thinking how seldom a CD listener experiences this kind of problem. I've never come across such a series with regards to my digital collection, but then I haven't heard something like this from my vinyl corner either. And the icing on the cake is, I can't even remember where I bought this stuff months ago, so there's no use trying to exchange it.

Anyway, enough of this, my favourite medium will be vinyl, no question about it, but it did bring up the question why so many newly pressed LPs (and 7"s) are of such bad quality. I'm buying also quite a few punk LPs and guess what, 95 % of them are of audiophile quality pressing. No distortions in the quiet areas or elsewhere, and that's the way it should be.

Devon
Posted by Devon at 7:06 PM No comments:


James Fearnley, sometimes accordion player with the Pogues, has written an account of life in a mildly successful band up to the year 1993, when he left the Pogues. I've always held this band in high regards and, actually, I own all of their studio albums, a number of singles as well as some 12"s. I've seen them live with their original bassplayer Cait and even when Shane (the singer) had left, with Joe Strummer. The band had it's ups and downs. From a rather colourless debut album via their early masterpiece "Rum, Sodomy And The Lash" through to some lesser offerings, the band had visited all the stops on the road to fame.

Of course, their X-mas song with Kirsty MacColl will forever and a day be one of the cornerstones of popular music. Others like "A Pair Of Brown Eyes" and quite a handful of contenders are not far behind. When Shane left (or rather, after he was thrown out of the band), the band nearly self destructed musically. There was just nothing great about the band anymore (at least on record - live, with Joe Strummer was an altogether different matter). Nowadays, the Pogues are in a different incarnation on the road again, playing gigs with their erstwhile frontman. But really, I don't want to see a band that's giving it a shot on the oldie circuit. Not the Pogues anyway. 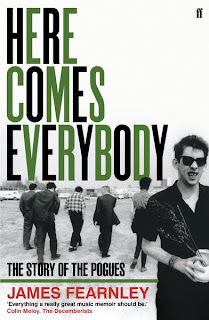 It was thus, that I recently read the aforementioned book and I came away with the distinct opinion, that one shouldn't read inside accounts of performers you hold in high esteem. First of all, the writing style of James Fearnley is not something to write home about. In fact, it's rather dull and drags itself mostly through the 400 pages. It's just bad style, there's no cliff hangers, no suspense and, at least for me, far to little on the actual music, be it recording- or gigwise. What you get instead is accounts of mashed pineapples, some tensions within the band and a lot of drab. One gets the feeling, that this really wasn't a band at all, but a bunch of drifters being thrown together by chance, trying to make a living of what was at hand.


I, for one, came away a bit disillusioned, although I didn't expect the Pogues to be the type of guys walking around with a halo, I was amazed of their childish behaviour, their immature relationships within the band and their overall problems of facing the world. Naturally, it could be James Fearnley's tinted view of matters, but I do suspect, that there's a truth buried somewhere. Although I suspect that the author had an axe to grind, even though he's obviously covering this up to some extent. Conclusion: If you're a diehard Pogues fan, spare yourself the cash to buy this book and the time to read this. This is not really a inside view of a band. Spend your money on their early records instead.

I'm a big fan of Rock, Beat and Blues from all strange corners of this earth. Thanks to a recent interest in even very obscure bands and countries, a lot of albums are being released of which we didn't have the faintest idea in my area. And buying the vinyl issue of a band from Mexico with the rather silly name Pop Music Team, should have rung a bell somewhere. But it's being described as killer Psych and some such drivel. I'm also kind of obsessed by so-called "weird" music.

I'm sorry to say this, but if this is Psych, all you fans of this genre out there, have been had, big time. I admit, I have zero idea what Psych really is. Better people have tried to explain this to me, but I know what it certainly isn't, this here, for one. But, and I'm not pulling your leg, this is one of the most fantastic "weird" albums to come into my collection for a very long time. I sit here, listen to the tracks and I can't help but have a grin on my face throughout both sides of the LP. This is class A stuff, a band that's a million ways away from where they want to see themselves, it's just funny. Mind you, I'm not talking about a bad record, just a very very strange one.

This make me wonder what they had been smoking, prior to  recording these songs. Must have been awfully potent stuff. Plus a few bottles of Tequila maybe? The insert is a beauty in itself, telling the story of the recordings/band on one half page and not even mentioning the shortcomings of the (back then unreleased) album. I don't know, they make it appear like Pop Music Team was a big player in their homecountry in 1967. Amazing, I wouldn't want to miss out on this album, although all for the wrong reasons.

Now, can someone tell me where all these reviewers heard killer Psych? "Nashville" is on now and, frankly, it would be killer track at a kids' party. Just great stuff!