And here's Rukey (keyboards) speaking about flector, his role in the band and his influences. And he doesn't even mention Uriah Heep with a single nod in their direction, which did surprise me a bit, if not to say a lot. Because, frankly, his keyboards playing cries the Heep. Anyway, here we go and again, shortened translation to follow soon (hopefully). 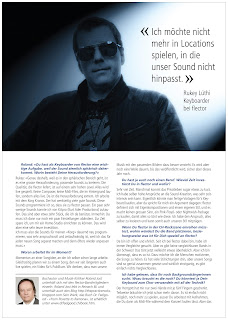 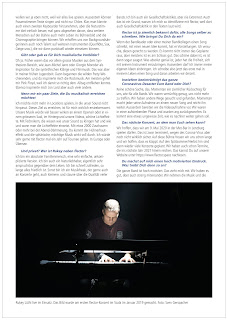 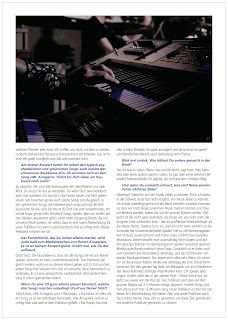 Roland
Posted by Devon at 12:44 PM No comments:

As a follow-up to my review of flector's CD/EP below, I'll have a series of interviews with the members of the band. In full, there's going to be a whole set (one for each member of the band). I have this ready as the full German version (see attachment) and fully intent to translate this at least in parts, as I'm aware, that not many who read this blog will be fluent in the german language.

Let's start with Carlo (guitar/vocals) and what he's saying about flector, the idea behind it and what makes flector tick. Click the files for bigger size. 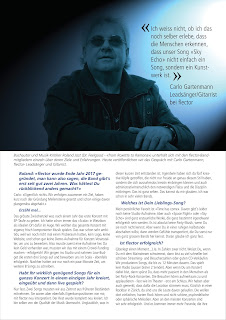 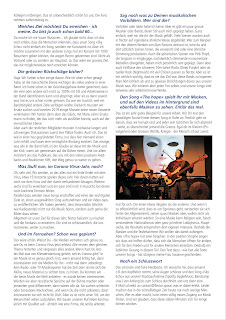 Give me some time to get the translation online. It'll show eventually at the bottom of this post.

Roland
Posted by Devon at 12:36 PM No comments:

Now, I could have sworn that I reviewed this CD (EP) some time back and if not in this blog, then where? Can't be on some forum, as I don't do those anymore. There's no way out of this misery but to admit, I forgot it completely (not the CD, but doing the review). Preliminaries: The CD can be bought via www.flector.space and clocks in at just below the 20 minute finishing line. Recording was done in 2018. Everything in place? As it should be.

Full disclosure: I know Carlo Gartenmann personally because he did everything possible to bring our book "From Roxette To Ramona - Dr. Feelgood And Wilko Johnson On Record" through the stages to the printer. Super job done and he sure did his magic on the doorstopper. There's a lot of his input there, some things he did on his own and, I have to admit, I couldn't have thought of a better way to do it.

Carlo has been the guitar player and lead singer in a few bands down the road. One of them was a rather Blues/Rock oriented combo (Red Lizard) and an earlier one (Nightcaps) was actually drifting more into the Krautrock vein ca. early 70's. I mean, I saw it that way, because I'm an old Krautrock fan from way back and the funny thing is, Carlo never concurred. However, I can quote chapter and verse from german bands that must have been his influences. He's totally in denial.

Well then, here's his latest outfit (I'm talking about "his latest" because he looks like the mainman here), although I'm sure this is not a big boss thing. The music? I can't really compare it to other bands, because this music is a bit of a niche product in my collection. And with the description of genres all watered down nowadays, I'm not sure I'll hit bull's eye. 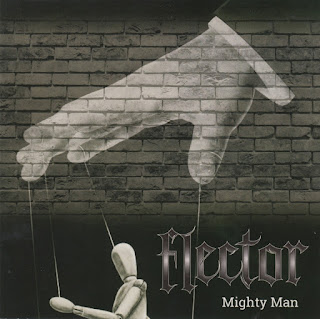 I can safely say, this is not for your average Blues, Rock or MOR fan. The tracks are more Prog than anything else (be careful, Prog is a very wide field and includes Death Metal stuff as well - which this music isn't). Yes are lame compared to flector (all lower cases - not my typo). What you don't get is senseless noodling, everything is conchise and to the point. The music is at times rather rocking and at other times quieter. One thing that strikes me, is, how good the whole band is with their instruments. And, although this is a private release, the recording is sonically excellent and a joy to listen to, in case your a HiFi buff.

GOT IT! At times it reminds me of Uriah Heep (the organ made it click). Early ones when they had their greatest hits. Yes, there's a certain similarity. I knew I wasn't a complete stranger to this music. 😇 Plus some more, I let you know if I can dig up some other band's name.

Of the three tracks are all originals and the credits are with Cedy Häuptling (music and lyrics), Carlo (muscic) and Susanne Gartenmann (lyrics). Back to the quality: It's very interesting to hear a band with that level of craftmanship, especially when they are not backed by some major label (in fact everything is self released. What I wish for, is a full album coming our way soon. That would be something well worth waiting for.

flector, like all other bands, do have the problem of cancelled gigs (due to the Corona virus spread) and what not. I know, support is a much used (and abused) term nowadays, but if you buy their CD, it gives you good Karma (and an excellent CD!).

Roland
Posted by Devon at 5:30 PM No comments:

The third CD from Ruzz Guitar's Blues Revue. I don't pretend to be aware of this band since time began, in fact, they only came to my attention via the current Pete Gage release. I'm not that nosy, but someone endorsed by Pete, well I had to check it out and bought myself the two studio albums and here we are, a live one. Before the suspense is killing you and you can't get to the end of this review, it's a great album. Nothing to see here anymore. Thank you!

The name Ruzz Guitar's Blues Revue might be a tad misleading, because it's so much more. Blues, sure, but there's also Rock'n'Roll or a dinner for two instrumental (I kid you not), well worth the price of admission. You won't get the rough type of Blues here, it's more the polished variant, although I hasten to add, it's not overpolished. You'll not be "Bored To Tears", if I may quote Greg Koch. This CD will keep your mind set on the music. 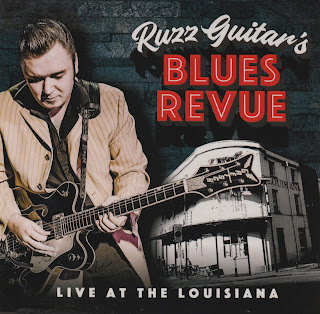 As hinted above, this Blues (etc.) is not your headbanging, stagediving kind of music. It's very laid back a lot of the time and there's brass and keyboards and it's like a puzzle, since all pieces fall into place quite nicely. The music does speak to you in a peaceful way and it says "listen to me, you can bring all your problems to the table when this is over and done with, but right now, you're here with me". And if you're anything like me (be careful what you wish for), you do as you're told.

Having said what I just said, there they are, accelerating up the hill and "Sweet As Honey" blares out of the speakers. Serves me right to call this "laid back a lot of the time". Well, let me rephrase this, the CD is diverse and that's what I like as much as the professional playing, the excellent recording and the songwriting (four tracks are Ruzz's originals). You get a total of eight tracks (wether the other four are covers, I can't say, without any research into the matter), clocking in at just under the fifty minute mark.

I've listened to it quite a few times since I got it in the mail and somehow, I think this is a close contender  for album of the year 2020. I'm not pulling your leg. And now over to a commercial: Please do support bands such as Ruzz Guitar's Blues Revue, because, especially now, they don't have any income from gigs when everything goes belly-up. Don't let bands such as this hold the short end. CDs can be bought at their website.

Roland
Posted by Devon at 12:19 PM No comments: