A while ago Pete Gage released his new album "Sweet Hearted Woman" (available on his website https://www.petegagemusic.com/). I'm just the lazy bugger these days, so it's just now that I'll say a few words about the CD. A word of caution: I'm a Pete Gage fan. My words are not very objective. Just wanted to make this very clear.

One reason I like Pete's releases is the fact, that he doesn't work the same paths as he did with Dr. Feelgood. This is completely different and if you want pogo in the pit and your eardrums shattered, you better subscribe to a Norwegian folkdance channel. This here is yours truly sitting at home, choosing a dram of the best single malt in the house, sitting down, feet up and just enjoying a CD. It's relaxing and goes extremely well with a Bowmore (25 years) or an Ardbeg (10 years). You're losing track of time, especially if you have this on automatic replay. 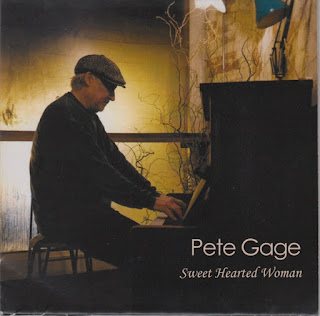 What you get is some of the best songwriting this side of the musical spectrum. The songs meander between Blues and Jazz and convey a mood that's thoughtful and inverted. I say this on purpose. Yet this is not depressing, somehow you get to think about the meaning of life (42, in case you didn't know) and your mind drifts off a bit. I've very seldom heard an album which has such a physical attraction. You're involved with all your senses. And the musicianship is first rate.

Pete has just the voice to carry these songs and they are on the right side of justifying repeat listening. All these tracks have been written by Pete himself and it's a stellar performance of his. However, the other players are top notch as well. Just let me mention Sean McBride, who gives a certain interesting patina to the songs. But then, I'm deep into Jazz (amongst other things). The soundquality is just great. I don't think this is a recording that's been fiddled with until all life escapes from the tracks. Another one where you have to open your wallet, otherwise you're going to miss some great music.