I'm a member of the KIOOS (Keep It Out Of Sight) group on FB, because the topic is a wide ranging scope of all matters Pub-Rock. And what's more, the discussion is quite civil and sometimes even interesting (which you can't say for a lot of groups on FB – internet stupidity (pun intended) rules the waves). So, here's for some background: 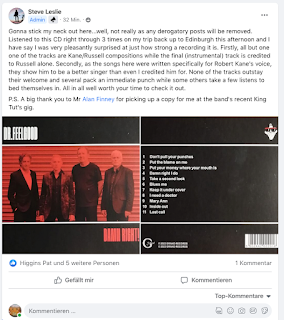 The last original member of Dr. Feelgood passed away in 1994 and then the whole shebang took a turn for the worse. The band carried on without a single original member in its ranks. Back in the noughties I spent a lot of time on the internet checking up on bands that claimed to be the successor of a previous incarnation. It's not pretty, believe me. As for me, a band without a single original member is a covers only band and has no right to keep on using a brand name. Of course, legalese will tell you that the name has been signed over to someone who is allowed to cash in. But as a music fan, I feel cheated. No, make this, I am cheated.

I do try to avoid those "discussions" and "arguments" whenever possible. It used to be much more important to me, but nowadays I won't even acknowledge such bands, much less buy or listen to their product. On the other hand, if they want to release new media or merchandise (and find a new group of buyers – or the leftovers from the original band), more power to them. There's a ton of good music out there and I don't have to spend my money on bands that cling to past glories, of which the current members were no part of. You can say, that I've found my peace regarding this subject and I circumvent the topic quite easily,

That is, until a certain point. One of these is the yea-sayers who claim that their way is the only way and would accept the umpteenth faux incarnation, just because they can and will spit their venom. Interesting thing is, they always do blame the nay-sayers for their opposing views. You can't discuss this with the pro fraction. I can understand this in a way, because most of them seem to be latecomers and have no idea what it was like when an artist set out at the beginning. And those are the folks that tell you what you need to do and think. Just like I would tell someone what Rock'n'Roll was meant to be in the 50's.

Checking "social" media, you'll also find, that most flaming wars start with someone from the yea-fraction starting a post along the line "...not wanting to wake the beast, but ..." or "... this is not a discussion about the real ..." etc. Yes, right, and the world is flat. The whole setup is so transparent and shows only one purpose, to stir the pot and to get the 15 minutes of fame (on FB nevertheless). And so it goes on and on and even if the whole of the nay-fraction drops of the face off the earth, the yea-sayers couldn't stop at what they are doing. Let's be honest, these bands are mostly has-beens and they are close to retirement, trying to squeeze the last out of the glory other people before them have achieved.

O.K., this by way of introduction the subject to better understand what this is all about. Now to the clip (from FB) that is included with this post. Steve Leslie is the admin for the aforementioned KIOOS group and has actually never come to my attention for being rude or disrespectful of the folks frequenting his group. This has definitely changed when this post popped up and the very first sentence I read was

Gonna stick my neck out here ... well, not really as any derogatory posts will be removed."

Seldom has an admin claimed to be the absolute ruler and he who opposes his views, will be shot at sunrise. Censorship? You bet! Looks like he's trying to gather his troops for a final battle and he wants only folks who are loyal to him on board. Or just maybe I don't get it and it's just games people play. How to work your way up to be a smalltown dictator in your spare time. If the admin is happy with his handselected flock, good for him. But discussion and exchanging views is not followers bowing to each wink of the master and hopping along to every disastrous battle on the way. I would advise some people to stick this kind of delusions of grandeur to within their own walls.

P.S.: I do expect better, much better, from an admin of an FB group with more than 5000 followers.