Before I forget it in the heat of the moment, Last Avenue will play another gig here in the Northwestern part of Switzerland and this will be on March 26, 2022 at the Auld Dubliner in Basel.

But the band just played the Bar Manhattan last Saturday. Just a word from the sponsors, Bar Manhattan hosts gigs almost weekly (Fridays or Saturdays or both). It's a smallish venue but quite a place to be and get yourself back on track after a week of hardship in your job. 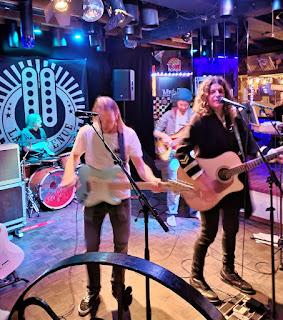 This was now my first time I saw the band in a live setting and it won't be my last. It's quite a difference hearing a band on record or in the flesh and believe me, they haven't disappointed this time either. Last Avenue call themselves "Hippie Rock", but take this as a pointer only. I heard a couple of times that folks called them very diversified and eclectic. But not beyond the point of recognition (my addendum). The band has their signature sound and it's of a good time nature.

When listening to the band on media, you could be forgiven to think that they only present original songs and I was actually surprised that a good chunk of what was on offer consisted of cover versions. I can understand that, you have to pull the punters in with what they know already. No complaints there and the folks in the audience loved it (and so did I). The recognition factor of their own material is very high and judging on this alone, the band could easily carry on through their set with nothing but self penned songs.ut there you, sometimes they just played the very first chords of a well known cover and the people started dancing. 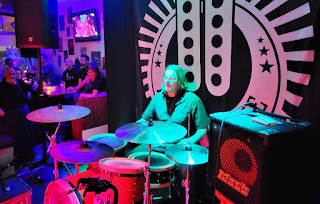 The place wasn't packed, but there was a good number of music fans present. The gig was a 2-set event and if I'm not totally mistaken, the first one consisted of more original material than the second one. Maybe it's just for party time later in the evening. I did hear high praise for the singer (that came first) and the band (which came later). The venue aids the listener in watching the band from very close up (in other words, you're one step away from the band) which could be unsettling if they watch your guitar, bass or drum runs and you can't allow for any mistakes. Perfectly mastered by Last Avenue. 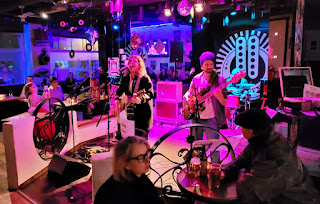 I've recently seen flector and the Glorias in this place and while all three bands play a different kind of music, it's all good and excellent Rock and with all three I had a flash of "bloody hell, they know what they are doing". Don't get me wrong, I knew what all three were doing, it was just that the power on stage is something different than on your stereo at home. Or maybe it was just a joy to have such amazing bands on stage and have live music again. The set lasted from around 9 pm to just after 11 pm (with a 15 minute break  - or so) and it was as much an excellent musical journey as well as a worthy night out.

Last Avenue work on a new CD which should be out sometime in the middle of the year (2022). Check their website (link below in the last entry before this one) for news and updates.

P.S.: And when I went home by public transport, from Basel to the suburbs, some guy (I had no idea who he was, but it was worth a thumbs up) was playing "Higher And Higher" on his smartphone for the benefit of everyone in the tram. This really made my day. 😇