Lockdown Docs – Back To Basics (LP)

A word about the quality of today's LPs: I used to read a lot of forums online and the consent seemed to be that the quality went down the drain since the 60s/70s. I never subscribed to this opinion and to me, people complaining about imaginary shortcomings of vinyl either bought the latest Celine Dion (who jumped onboard the train, because it was/is the hip thing to do). But don't restrict it to Mrs Dion, there's a certain Helene Fischer (German Schlagerkitsch) who's flooding the market with LPs. The point is, there were and are always quality pressings available, but if you buy the big sellers, which amounts to probably 5000+ copies these days, you get what you asked for. Pressings made in the Czech Republic, on a sandy beach with no lights on. Throughout the 90s/00s/10s etc., there were lots of quality pressings on the market, granted, mostly from independent sources. When the world was complaining, I still got my Punk records and not a fault in sight. I bought "Sticky Fingers" (new and sealed) and it looked like it came directly from a recycling landfill. I got the Lockdown Docs "Back To Basics" and every self declared audiophile would shed tears because this is the holy grail with regards to pressings. Dead quiet (except the music, of course), flat as the earth (no warps), perfect outside circle and the middle hole is exactly where it's supposed to be. I've stopped reading those forums and magazines a while back.

And now we have the Lockdown Docs putting one up. I was quite surprised when I heard of the imminent release of their third offer (the previous two being on CD). Haptically and sonically a treat and the rest is, as they say, history. You don't need to read between the lines to realize I'm impressed. And they even left the sand on the beaches in Finland. "Back To Basics" is the name of the game and the basics in this case are Dr. Feelgood, Doctor's Order and the Pirates (in no particular order). Of the ten tracks, eight are straight out of the Dr. Feelgood songbook (to the layman this spells covers), but more about this later. One is a Doctor's Order track from way back and "Honey Hush" is a Pirates cover. 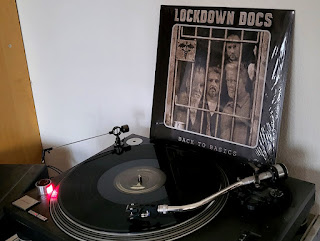 The band is going the way they laid out with the two earlier digital tasters, that is to say, no prisoners taken British style R'n'B heading in the right direction. Strange how this differs from country to country. In my neck of the woods, this kind of music wouldn't get you fame and glory and 200 kilometers east of here, you'd be the star of the show. Also, the sound is great, probably digitally processed, but there are very few all AAA releases these days. Most studios are just not equipped anymore to handle real analogue recordings (including analogue cutting for the final product). I know, we've all heard these Dr Feelgood tracks over and over again, but here, they sound fresh and were given a new lease of life. The Lockdown Docs don't pretend to be Dr Feelgood, they're faithful to the originals and even more important, they do not ape the Canvey four's song book. There's a touch of Lockdown Docs signature there. Beautiful execution. Top musicianship and a splendid job. I want to mention Jonatan Nurminen, because the singer gives the vocals a very own colourization and doesn't try to step into Lee Brilleaux's shoes, yet he's in control throughout. 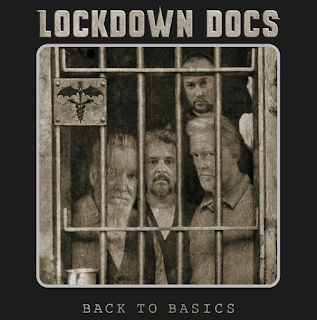 "Honey Hush" is, of course, a Pirates cover and, as with all the tracks on the LP, I wouldn't want to miss it. "So It Is" comes directly from the Doctor's Order debut and is penned by Archie Hämäläinen himself. This is one of the top three tracks from his earlier band and with the mentioning of Lee Brilleaux in the lyrics, it's a fine tribute and still, even with the time passed, an excellent song with a hook that won't let you forget it. Highly recommended release by this newish band from Finland. I got my copy directly from the band (thanks a bunch) and Blues Shop in Finland used to sell some, but it seems to be sold out there (maybe they will restock the record) or try Goofin in Helsinki which is another outlet carrying the item.

A word regarding "So It Is": There's an earlier vinyl version (7" single) available that comes with the book "From Roxette To Ramona / Dr. Feelgood And Wilko Johnson On Record". Copies are still available. Contact me if you're interested in the book and the record (dr_feelgood (at) bluewin.ch). I'll send you the details re price, payment etc.