Now that I had some time to let it sink in, I still can't make heads nor tails out of this. The fact that Doctor's Order did gigs with Pete Gage well before their debut release? The fact that the 1998 live outing was recorded at all? The release on CD more than twenty years later? The selling of this CD is tagged as sensational and I do tend to agree with this statement.

When I read about the upcoming release, there was mention of the sound quality not up to par but that it had been brushed up and was in an acceptable state (I'm paraphrasing here). While it's definitely not an audiophile reference recording, it's enjoyable to the hilt and you shall be forgiven, if you intended to test your new equipment with this release. In short, it is far better than what I expected from reading about it. Just let me say, I never use the Bass, Treble or Balance on my stereo, but this time I set the Treble to almost a quarter past. And the sound did enhance considerably (probably an audiophile's nightmare, but there you go). 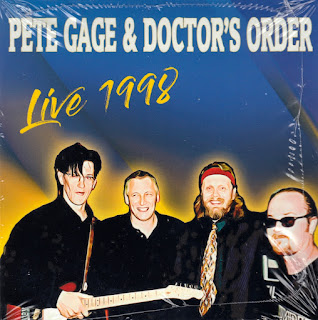 The recording has been made by Rane Mäkinen (what you call an audience recording) and Teppo Nättilä seems to have had a tape all the time, that just saw the light of day recently again. So, this is not a bootleg per se, as it's released by Doctor's Order with their full input and permission. And I suppose with Pete Gage's approval as well.

The recording was done at a place called Beefy Queen in Helsinki on October 21, 1998. And the line-up was: 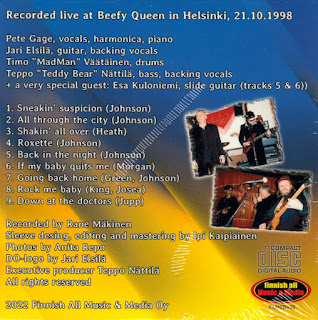 What you get here are nine tracks at just beyond 33 minutes. I can't say wether this was the whole set, parts have been lost or damaged or wether Pete Gage appeared on only the tracks that are now offered to the public. The whole set consists mainly of Dr. Feelgood songs and covers and, of course, Pete Gage is the man in 1998. The songs you've all heard before, suffice to say the singer does what he used to do in his own band. With his quite recognizable voice, he's the anchor here. Interesting fact, most songs are actually from the Wilko Johnson songbook (see picture). Plus  Johnny Kidd's "Shakin' All Over" (just unkaputtbar) and Mickey Jupp's "Down At The Doctors" etc. 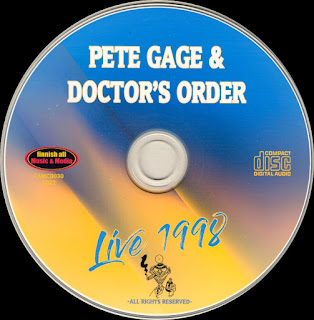 You get a very good idea at what it must have been this evening at the Beefy Queen and you wish you would have been there. But don't cry over spilled milk, there's this substitute available (limited to 100 copies and closing in to zero fast at Blues-Shop) and, yes, it's still not the real thing. But it'll do if you missed it, like I did. The photos that you see on the release were taken by Anita Repo, sleeve design, editing and mastering by Ipi Kaipiainen and the DO logo by Jari Elsilä.