Sometime towards the end of 2018/beginning of 2019, I realized, I didn't listen to music as often as I used to. Very little LPs, CDs or even live gigs. Every now and then, the stereo on the desk was blaring out some oldie station. Every now and then really means, every three or four days for 15 minutes. And up to the beginning of 2019, LPs were piling up and still standing were I put them when I brought them home. Meaning, there are around 500 brandnew albums waiting to be heard at least once.

Oh well, there's very little in the way of CDs, as I almost stopped buying these. For quite some time, I used to buy vinyl only and if that meant, waiting for months on end. Just in case I was pretty sure (and sometimes wrong) an album wouldn't turn up on LP, I'd spent my hard earned cash on the small discs. It's come so far, that I actually decided, not to go to this year's record fair in Utrecht. I've been there, saw that, did it, the whole lot. Funny thing, I've not been to a record store (any record store) within the last 4 months. How about that? And the worst thing, I don't miss it a bit. Nada, zero, niente!

What I did, however, was trying to weed out some of my collection, because the CDs and LPs crept ever closer. All together, about 600 LPs and 400 CDs went to a landfill (if there's still such a thing, which I doubt), meaning, they're gone for good, if not landfill than at least for long distance heating. The better stuff I'm flogging on Discogs and one day I'll have my collection reduced to 2000 LPs and 1000 CDs. And then I can walk through the flat without almost tripping over my stuff.  I'm dreaming but I'm also trying. 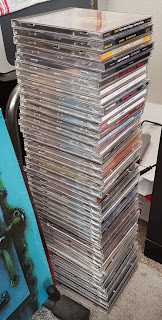 Recently I was sorting through a bunch of CDs I had bought about a year ago. It was supposed to be all Metal and stuff, forget it. About half of the more than 300 CDs, went to the bin. Jesus Christ, it's not so hard to pinpoint the genre, is it? The condition of the items was generally beautiful though, everything in M- or M condition. About 100 CDs have been marked for sale on Discogs and what you see above is the rest. Too good to be thrown away, not valuable enough to put up for sale. Now I'm trying to seperate the chaff from the rest. And then it's goodbye for some more discs. 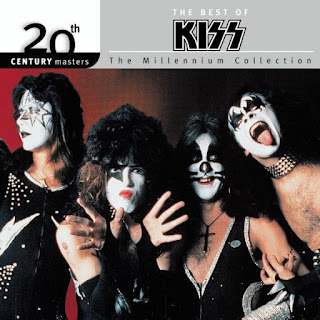 Well, it's Kiss time now and I guess they're here to stay. Not really my band, but I had a discussion a while ago and the other guy mentioned, that, to his big regret, he missed out on Kiss. And I thought, bloody hell, I wish I had been to one of their gigs as well. But, if I go through the stack at the current rate, I'm not finishing this by the end of the year. Let me see, where this leads me to. And for Utrecht November 2019, I believe, the desire to make the trip again, might bounce back.