Honey Aaltonen - Presents "The Ultimate Party Album"
The much broader approach to the world of Rock, here in this blog, allows me to introduce you to local scenes far off the mainstream countries like the U.K. or the States, be it Japan, France, Finland, Germany or Switzerland (or whatever else seems to be interesting). Here's a finnish artist, hailing from Helsinki (sometimes I think, they all come from there). I was given the CD as a present when I was up there in 2010. Now, I might have been told, that Honey Aaltonen is a member of Tortilla Flat (http://www.tortillaflat.fi/), but either my long term memory just doesn't serve me properly anymore or ... . Tortilla Flat, of course, being one of my favourite bands from up North. Unfortunately, there are not many recordings available, in fact, I just have two CDs and one or two 7"s. There's not much more, despite the fact, that the band has been going on for 30+ years. And what's more, they are not exactly unknowns in their native country.
On their own website, they term their music Rhythm'n'Blues. I know, one should never contradict the artist, as the usual stance is, that they know best what they are doing. But let me tell you, if you're in search of Rhythm'n'Blues the like of Dr. Feelgood, you're certainly at the wrong address. R&B it might be, but a different kind of. Tortilla Flat is somehow more sophisticated, even more 60's oriented, more on the Rock'n'Roll track laid out by some bands in the States. While Dr. Feelgood's R&B was mostly an angry kind, Tortilla Flat's is mostly user and party friendly. There's a world between the two bands. Both well worth their money, just not on the same side of the record. Listening to the Dr. Feelgood, there's a certain tension in the air, while Tortilla Flat relaxes you.
Honey Aaltonen is the drummer of Tortilla Flat (I suppose you were beginning to wonder, where this one's going to lead to) and their main songwiter. Last year, he released the "Ultimate Party Album", which is some sort of compilation taking in the years between 1990 and 2010. This is Tortilla Flat but also solo activities by Honey and different bands he seems to have played with. Also there are some unreleased demos and a bonus track, especially recorded for this release. Twentysix slices of finnish R&B/R&R/Rock/Blues and matching the title of this CD perfectly. "The Ultimate Party Album" is no exaggeration (well, maybe just a tiny little bit). You get mostly upbeat songs with a few ballads thrown in. Don't get nervous about these, they come across very well. I just want to point out "Like Lovers Do", that one had me hooked already when it came out on a regular Torilla Flat release. 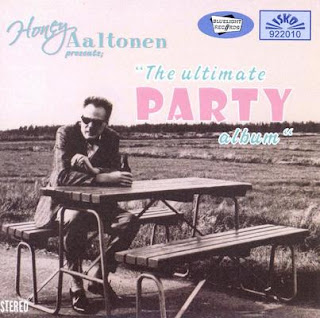 And a guy who covers Sol Hoopii ("Hula Blues") can be just one of the good ones. Honey Aaltonen must have played with a ton of bands, although I must confess, except Tortilla Flat, I haven't heard of any of the others. Here, on this CD he can be heard with: Honey's 45 (+), Teendreams, Tortilla Flat, Cat Lee & Co., Big Bertha And The Bulldozers, Honey's Tex Mex B-B-Q, U-Bayou, Hawaiian Hula Hoppers, Crossroad and Honey's Bar Room Trio. The CD is available on Bluelight Records Isko 922010. Check it out, a good time is guaranteed. And while you're at it, try to get the two CDs by Tortilla Flat as well, but be careful, there are a lot of bands that call themself Tortilla Flat. I know of a Swiss one as well as a German band. And there seem to be more, and also Tortilla Flats (I believe from the States), I should know, since I have the latter in my collection, having hoped, that this was the finnish band and what did I get? Forget it, Tortilla Flat from Finland, is, what you want.
Cheers